“A thoughtful and original piece, revisiting the traumatic effects of the war in Lebanon in 1982.”

“Waltz” won honors as the Israeli Film Academy’s best film. It’s a thoughtful and original piece, revisiting the traumatic effects of the war in Lebanon in 1982. The enriched phantasmagoria benefits greatly from being shot in animation (a mixture of Flash, cel, and 3D original drawings), because as a straightforward documentary it might not have worked out as well. It incredibly, in a seamless manner, mixes together the real and the surreal that captures both a dream world and a world that is autobiographical. I believe this was the first animated feature made in Israel.

Director Ari Folman (“Made in Israel”/”Saint Clara”) makes it a personal film more than an historical film, one that recalls his war experience in Lebanon when the filmmaker was just 19 in 1982. By using dreams and interviewing those in his combat unit some 20 years after, the sensitive filmmaker comes up with this disturbing nightmarish ‘horrors of war’ tale. Its title is derived from the name Bashir Gemayel, the popular hero of the Christian militias that allied themselves with Israel against the Palestinian terrorists.

It dramatically opens with a pack of rabid dogs rampaging through the nocturnal streets of Tel Aviv. This we soon learn is the recurring nightmare experienced by one of Folman’s combat friends. Because his commander understood that he couldn’t shoot a person, the almost pacifist was assigned to kill the barking dogs when entering a Lebanese village so they wouldn’t alert the enemy of an attack. The soldier’s nightmare brings back the haunting memory of killing 26 dogs during such a raid.

Folman states he has forgotten and repressed everything about his bloody wartime experiences, but currently envisions naked soldiers with dog tags and Uzis emerging from the ocean onto Beirut’s snazzy western-like hotel strip. With that being the spark that lights the fuse, Folman uncovers with a shocking savageness those uncomfortable buried memories and feels he needs to visit at 6:30 a.m. his analyst friend to get a proper read on what’s cooking inside him. The analyst suggests the best therapy might be to track down the other combat soldiers he served with and get their slant on their war experiences as a therapeutic means of coming to terms with his past actions.

Traveling to Holland, the director gets further accounts from a combat soldier who emigrated there and who tells a tension filled story of killing civilians in a car. The filmmaker goes on from there to tell of the Israeli tanks rolling into Beirut and being met with sniper fire, as civilians watched from their hotel terraces. It leads to the massacres at the Sabra and Shatila refugee camps, which was internationally labeled as an atrocity in which the IDF stood by and allowed the Christian Phalangists to commit the slaughter and torture of unarmed women and children who had surrendered. This outrage Folman has repressed but had never actually experienced. In any case, Folman links the killings of the Palestinians to the experience of his parents in Auschwitz, reminding him of those who stood by and offered no assistance to the Jews being rounded up to be sent to their deaths in the concentration camps. The hallucinatory and inflammatory animated documentary, after showing that even in the most ugly moments there can be a sense of beauty to savor, ends by leaving the animation format to present some haunting graphic newsreel footage of the destruction from the invasion that lets us know that whatever beauty can be recreated from such horrors should not make us forget the devastation and the toll it had on the people caught in the conflict. 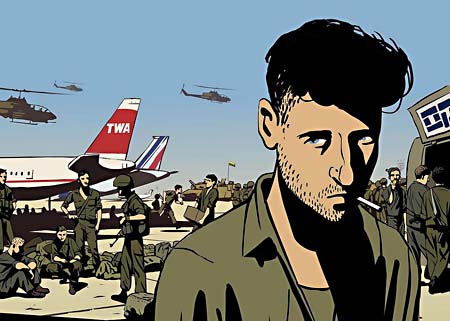