“A non-stop idea fest told in the form of real conversations people have.”

Richard Linklater’s (“Slacker”/”Dazed and Confused”) innovative animation feature is remarkable for being both an enriching technical achievement and a stimulating intellectual experience. Linklater’s visualizations are never still and are unusually life-like, always expressive, and are complementing the film’s many cosmic and metaphysical ideas. It’s a mind-trip of viewing pleasure, where drugs are not necessary to alter your state of mind. It’s your curiosity that takes you into the imaginative states between waking and dreaming (though drugs might be helpful to some).

Wiley Wiggins is the unnamed laid-back perennial student of life, who will play the part of a dreamer who can’t awaken from his dreams though he has several false awakenings. He’s stuck in a dream where he meets a wide assortment of characters at random, some with wisdom and others with zany ideas to disperse, as these characters go on a philosophical rant on reality. Wiley is the focal point of the film and his open-mind to those he meets, is perhaps how Linklater is himself.

Leary is quoted as saying that after his body is dead, he would like his brain to be alert for 6 or so minutes afterwards so he could revisit his life and see what he was supposed to see if there were no distractions.

There are many different ways of looking at reality, and some ways that Linklater includes are the theories from the ‘New Evolution’–a connection of analogical and digital truths combining within the neurological framework of man. The Texas born Linklater, though never attending college, audited the lectures of philosophy Professor Solomon in Austin, who in this animation calls existentialism an exuberant philosophy and not one of despair. It gives mankind more hope in finding himself by changing things than a philosophy of predestination does.

The esteemed French film critic André Bazin appears in the dream sequence and mentions his theory about the ontology of cinema. In the conversation he’s having with another cinephile he turns to Bresson and how he saw reality as God in his films, as both the light and dark images are revealing of God — no matter that they are created from something unreal. Another character comically mentions that Kierkegaard’s last words were “sweep me up.” One angry man painted with a red face in a Texas prison swears a torturous revenge on those who arrested and convicted him, if he ever gets out of this shit hole. One character says “I believe reincarnation is just a poetic expression of what collective memory really is.” One disgruntled activist, who says the media’s purpose is to get the people to accept the current reality, douses himself with gasoline and calmly ignites himself into a ball of flames. Speed Levitch, the philosophical tour guide from “The Cruise,” is on a bridge giving another tour talk about the poet Lorca and the author D. H. Lawrence, and Speed muses on his opinion that one can find reality through one’s dreams. One character tells how the writer Philip K. Dick four years after his book was published meets those he never met before at a gathering and they have the same names he uses in his book and are involved in the same situations he wrote about. Another character explains that away by saying the Bible’s “Book of Acts” was written from the point in 50 A. D., indicating everything turns back to that time period because time is just a distraction — since everything points to eternity through Christ. People only say no to eternity because they are not ready for the inevitable, and therefore continue to wander aimlessly in time. One character wonders why so few true artists are produced by society, and the answer could be when a prior character raises questions about human character by asking “Which is the most universal human characteristic, fear or laziness?” These two negative characteristics seem to stop most from exploring the unknown and becoming artists.

Linklater appears near the film’s end by a pinball machine and sums up his take on dreams, which he says give one a chance to find eternity unhindered. He further says “There’s only one instant, and it’s right now, and it’s eternity.”

The film is a non-stop idea fest told in the form of real conversations people have.

What makes “Waking Life” a visual technological marvel is how it was so creatively constructed. It was done by first shooting the film in live-action on digital video and then art director Bob Sabiston supervised the film’s animation team. He developed the software to work on the Mac G4 computers, and he had as many as 30-artists paint over the live-action footage. The arduous creative effort made for a wonderfully dream evoking film, that fits the film’s surreal themes through the shotgun marriage of cinematography and animation.

This is a dazzling and overwhelming film, a unique work of true art. It’s an intellectual oddity that will be long remembered for its spirited approach to philosophy and to life, it’s a film that has given me more pleasure and hope for future films than any other I have seen this year. It is free-flowing with ideas and has the feel of being both scripted and improvisational. It reflects the curiosity of the director who is not afraid to be still learning and breaking new ground. The film is not concerned with plot or about trying to make a point, but with ideas and having the medium itself be the message. The effort is a genuine artistic one, there’s not one ounce of Hollywood slickness in this film. For that alone, this film is closer to reality than most films. The Disney animation cartoon that the public has grown used to does not resemble reality, while this Linklater animation cartoon is a whole different animal. 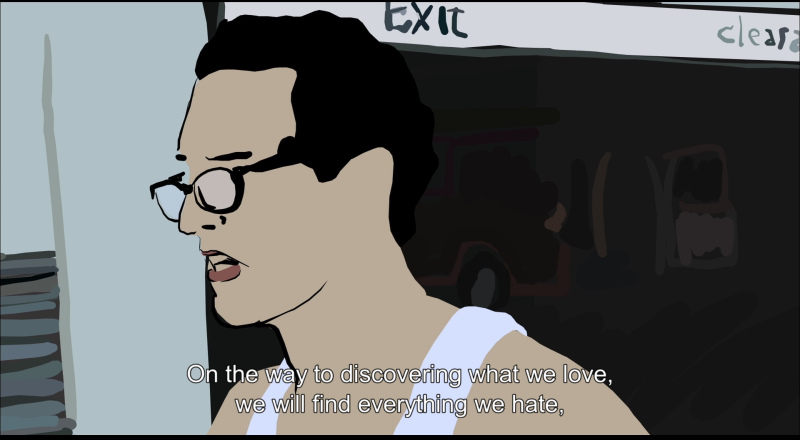