A depressing sea adventure tale that sets a dreamlike mood, where John Wayne shows he can act as he plays a complicated two-fisted character who is capable of much love and hatred (Who said Wayne couldn’t act?). It’s directed by Edward Ludwig and is based on the book Wake of the Red Witch by Garland Roark; Harry Brown and Kenneth Gamet turn in the murky screenplay that wanders all over the map. It was nicely photographed by Reggie Lanning, creating atmospheric shots of deep sea diving. The film gave Wayne a great deal of pleasure, since he forfeited salary to shoot for a percentage of the film. That turned out to be a good move, as the film proved popular in the box office and he earned a whopping $750,000 back in 1948. Wayne named his production company Batjac, which was lifted from the film’s shipping firm.

The film is set in the East Indies. There’s a bitter rivalry between hard-drinking and volatile Captain Ralls (John Wayne) and treacherous Dutch shipping magnate Sidneye (Luther Adler). We learn the reason for the animosity through flashback when Sidneye tells his side of the story to Sam Rosen (Gig Young), who is Ralls’s first mate: The dispute centers on an argument long ago over pearls and that Ralls’s love, Angelique (Gail Russell), was stolen by Sidneye. The magnate married her after Ralls went into a rage and killed her brother (Eduard Franz) because he arranged for Angelique to marry Sidneye. She then turned her back on Ralls, the man she always loved.

The feud continued to the present, as Ralls is the captain on Sidneye’s ship the Red Wake and has sunk the ship somewhere in the South Pacific because he plans to come back later and go diving for the valuable cargo of gold it was carrying.

It’s noteworthy that this is one of the few films where Wayne dies.

Because it was so confusedly told, it never became more than enticing. Its best features were good production values and fine performances not only from Wayne, but from Russell, Adler and Young. 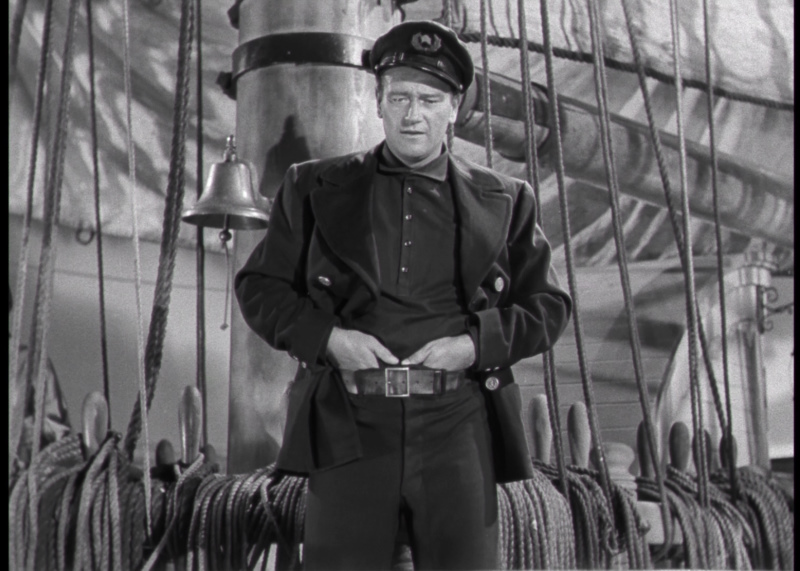