A neglected gem that had an undeserved poor box office on its theater release. After an intense search from 1996-2000 the original lost negative was located in the States and restored by the National Film and Sound Archive in conjunction with Sydney’s Atlab Laboratories in late 2006. With another chance to view the film at festivals, at theater releases and on DVD, the unfairly maligned film that was distributed into the 1990s as a damaged print, now in its restored digital format it gave the public a true second chance to reevaluate it and the buzz circulated about what an amazingly good film it was. The London-based Canadian Ted Kotcheff (“First Blood”/”Weekend at Bernie’s”/”Rambo”)directs with a sense of urgency, passion for detail and an eye out to capture what life in the outback means for those white folks living there. It was written by the Anglo Jamaican, Evan Jones, who keeps it faithful to the acclaimed 1961 debut novel by Aussie writer Kenneth Cook. To give us some insight into Cook’s vision, there’s a forward in the book that says: “may you dream of the devil and wake in fright.” A saying the author attributed to “an Old Curse.”

The sensitive nice guyJohn Grant (Gary Bond) is a city bred teacher stuck teaching in a one-room schoolhouse in the desolate outback town of Tiboonda. John hates his job and the barren place he’s forced to live, where in order to get work he put up a thousand dollar bond with the State Education Department to guarantee him a job. To get back his bond money, John must fulfill the teaching contract in the outback.

John plans on going home to Sydney and visit his girlfriend during the six-week Christmas recess. He takes the train to the rough mining town of Bundanyabba, known as the Yabba, planning to stay overnight and in the morning take a flight to Sydney. But the aggressively friendly local constable (Chips Rafferty) buys him drinks and he gets hooked into gambling at an honest gambling den playing Two-Up, a local coin-toss game, in an attempt to win enough to pay back his bond and get released from his teaching obligation. But he embarrassingly loses all his money, dignity and spirit. While stuck in Yaaba, he makes impossible friendships with vulgar people he always despised. These hard-asses become insulted if he refuses to drink with them, so he has to adjust his stance and let go of his previous attitudes. John accepts the friendship of the drunken Tim Hynes (Al Thomas), who only asks that he accept the free drinks and be his drinking mate. Janette Hynes (Sylvia Kay) is his attractive but slutty wife, who is willing to screw him. Tim’s macho mates Dick (Jack Thompson) and Peter (Peter Whittle) try to cheer him up and invite him on a grisly kangaroo hunt, even giving him a rifle as a present. The alcoholic bachelor doctor, Doc Tydon (Donald Pleasence), who lost his medical license in the city but is allowed to practice in the outback, takes the stranded teacher in for a week-end of boozing. Returning from the gruesome kangaroo hunt, a drunken Doc Tydon kisses and has his way with the disheveled drunken teacher. The next morning the ashamed John splits and tries hitchhiking to Sydney. When things become so hopeless for John, who can’t make it to Sydney, he returns to Doc Tydon’s shack and tries to either shoot Doc Tydon or blow his own brains out, but only ends up in the hospital with superficial wounds and with Doc Tydon’s assistance takes the train back to his teaching post.

The film is a brilliantly told existential tale about an innocent going on a self-discovery journey to find out his true nature, who must find his own path through the established myths he encounters about the beauty of friendships, the accepted macho outback culture of drinking, brawling and guns, and of how hostile it is for the white man to live in the outback. It’s about acting on one’s feelings and how one can degenerate when not in the right environment or not knowing how to survive in adverse conditions. There’s a power in the film-making that transcends any sense of reality or violence or preconceived notions of romanticizing the outback and by its making its anti-hero protagonist such a sympathetic lost film noir character who is trapped living a lie when stuck out of his elements 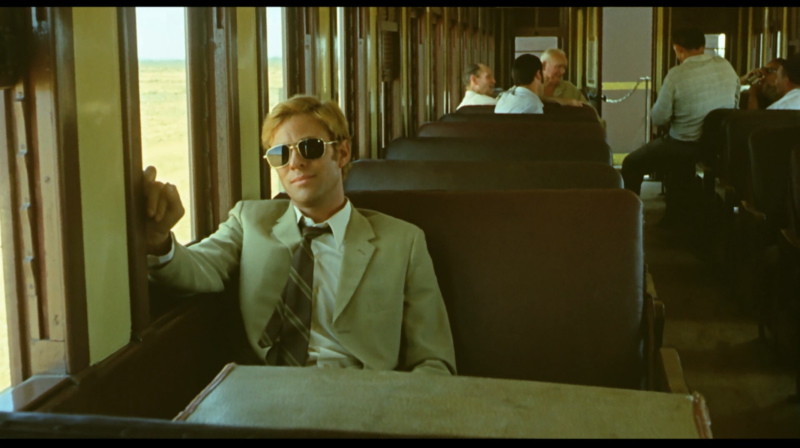