“Nail-biting until the end.“

A superb suspense drama based on the play by Frederick Knott (he also wrote “Dial “M” for Murder”), that’s much scarier and superior to most Giallo and slasher films. It’s tautly scripted by Robert-Howard and Jane-Howard Carrington. James Bond director Terence Young (“That Lady”/”Dr. No”/”Bloodline”)effectively keeps it nail-biting until the end, and marvelously keeps it from being as stagy as it could have been. Audrey Hepburn takes the role of the vulnerable blind victim played with acclaim on the Broadway stage by Lee Remick, and deservedly gets an Oscar nomination for Best Actress. Her performance is so good I was convinced that she was blind. The likable actress stopped working the next nine years and then played in Robin and Marian (1976). During that period of not working Audrey spent time raising her child in Switzerland and in 1968 divorced hubby Mel Ferrer. She soon afterwards married a much younger Italian psychiatrist and had another child. After raising her two children in Rome, Audrey spent the rest of her life doing charity work as a Special Ambassador for UNICEF and did charity work for Third World countries before dying from cancer in 1992.

Arriving in NYC from his flight from Montreal, photographerSam Hendrix (Efrem Zimbalist, Jr.) unwittingly helps the sexy Lisa (Samantha Jones) smuggle a doll packed inside with heroin, when holding the doll for Lisa at the concourse of Kennedy International airport. Lisa skips out when met by a contact at the airport, and Sam is stuck with the doll. The photographer’s wife Susy (Audrey Hepburn) became blind from an auto crash a year ago and married Sam after he heroically saved her life during the accident. Susy is struggling to become self-reliant, and attends a Lighthouse school. Left home alone in their Greenwich Village basement apartment when Sam is at work, as a bratty unreliable teenage girl, Gloria (Julie Herrod), who lives upstairs, comes by to do the shopping chores and look in on Susy once in a while. The unstable bespectacled 14-year-old sometimes plays cruel pranks on Susy because she has a schoolgirl crush on Sam and is jealous of the beautiful Susy, but is not really a bad person.

Two jailbird con men partners and former colleagues of the untrustworthy Lisa, the weasel-like ex-cop Carlino (Jack Weston) and the smooth talking handsome Mike Talman (Richard Crenna), show up at the Hendrix’s unlocked empty apartment at the invitation of Lisa and are surprised to be met there by someone they don’t know but learn is Lisa’s psychopathic husband Roat (Alan Arkin), who murdered her for double-crossing him on the drug deal and left her hanging in the closet. Roat convinces the two-bit hustlers to take his business deal, after framing them for his wife’s murder and threatening to turn them in if they don’t accept his proposition. The con men are hired to find a way to get Susy to reveal where the doll is hidden, which Roat believes is in the locked safe in the apartment. Meanwhile Lisa’s corpse is dumped by the hoods in a nearby parking lot, and the unholy trio the next day re-enter the Hendrix apartment under false pretenses, carrying out a phony police investigation and implicating Sam as a suspect in Lisa’s murder, as a helpless Susy is home alone because hubby treks by bus to Asbury Park, N. J. on a last minute job assignment. At night things become more intense with the violent thugs frustrated trying to retrieve the missing doll from the blind Susy, who becomes suspicious of them by using her newly learned tactile skills as a blind person.

The memorable climax has the frightened Susy trapped in her apartment with the creepy Roat threatening to kill her with a kitchen knife, even after she gives him the doll that mysteriously turns up. When Susy smashes all the light-bulbs in the apartment to even the playing field, Roat keeps coming after her. This chilling scene stacks up with the great ones in slasher film lore and is comparable with even Psycho’s shower scene.

The well-acted and excellently plotted film did however have a fuzzy plot detail moment, such as when Sam is in New Jersey on a wild goose chase and he receives an emergency phone call from the psychopath that his wife had an accident and was taken to Bellevue Hospital–one would think he would have called the hospital or his home before rushing back (I would have). But that’s maybe just nitpicking over nothing important, as this mainstream shocker is top-drawer. 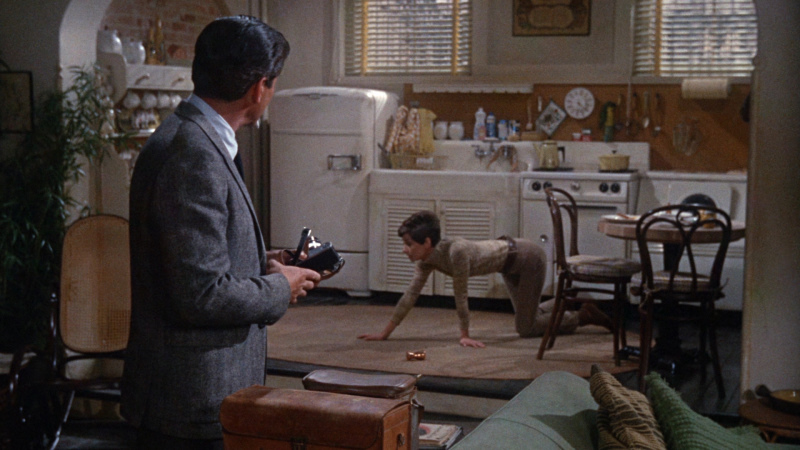