French filmmaker Henri-Georges Clouzot (“Manon”/”Inferno”/”Diabolique”) directs and scripts this bleak anti-capitalist exciting existential adventure film, whose motto is taken from the American oil company depicted: ”Wherever there’s oil, there’s Americans” This isClouzot’s best realized film. It’s based on the best-selling novel by Georges Arnaud. The gritty pic is set in the impoverished, sweltering, dusty rural fictional town of Las Piedras, in Latin America, that’s under the thumb of an American oil company. The town draws a number of foreign derelicts, stranded there without money or work prospects when their oil company jobs don’t pan out. When the American oil company needs two truck loads of nitro-glycerine to put out a well fire, a desperate foursome is hired to take it 300 miles through the jungle and rugged terrain. They are only given a 50-50 chance, but are offered good pay ($2,000 for one week of work). The cynical oil boss manager, Bill O’Brien (William Tubbs), wants two in a truck and gives them a road test to see who qualifies. The cocky Corsican lover boy Mario (Yves Montand), the resourceful loner Dutchman named Bimba (Peter Van Eyck), the genial terminal lung illness bricklayer Italian Luigi (Folco Lulli) and the older French con man on the run Jo (Charles Vanel) are finally hired. Jo might have murdered Smerloff (Jo Dest), to be his replacement when Jo doesn’t show for the midnight run.

The suspense mounts as the men risk their lives for a paycheck and must overcome truck breakdowns, a fragile bridge crossing, a boulder on the road, passing through a pool of oil, their own stress and riding for long stretches with explosives on roads that are bumpy.

Vera Clouzot, the director’s wife, plays the cleaning lady bar maid in Hernandez’s hotel, whose lover is Mario. Her role took away from the pic’s authenticity as she was hardly believable. 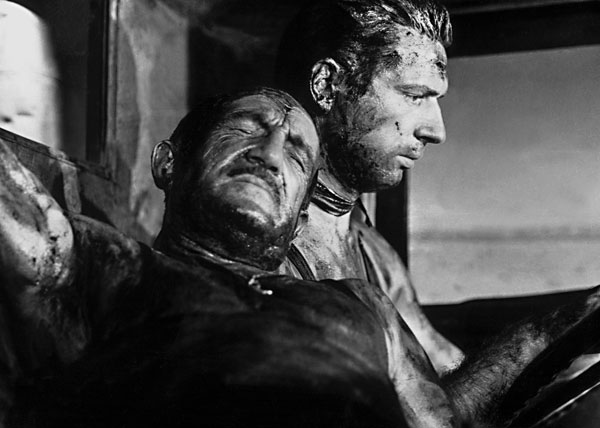