VOYAGE OF THE DAMNED

Stuart Rosenberg (“Cool Hand Luke”/”Brubaker”/”The Amityville Horror“) awkwardly directs this powerful and very moving historically important story that the filmmaker based on a shameful true incident that’s still not forgotten.In May 1939, the perv Nazi propaganda minister Goebbels had 937 German Jews removed from concentration camps after they paid him a high price and shipped them to the apparent safety of Cuba by the Hamburg-American luxury liner S.S. St. Louis. Only the Jewish passengers were refused entry in Havana, Cuba, and then refused entry to the United States. The liner was forced to return to Hamburg, Germany, as arranged by the Nazis. It was the Nazi’s propaganda point to show that Jews were unwanted everywhere, not only in Germany but even in democracies.

The star-studded cast, with too many cameos, come up with a few fine performances, but the high-minded film is lumbering, too long and too tedious.What it has going for it is that some of the performances ably present the anxiety and despair of the voyage–something the superficial screenplay by Steve Shagan and David Butlercouldn’t manage (yet, the writing duo received a nomination for best adapted screenplay). The banal screenplay (trying to be a Ship of Fools) fails to convey the seriousness of the voyage, and gets lost in too many characters and subplots to keep track of. It’s based on the book byGordon Thomas and Max Morgan Witts.

Faye Dunaway (donning a monocle and high leather boots) and Oskar Werner (in his last film) do a decent job as a wealthy Berlin doctor and his antsy wife, who have marital problems. Max von Sydow as the humanitarian German skipper, is the glue that holds this mess together. Malcolm McDowell as the captain’s cabin boy gets involved in an overwrought Romeo-and-Juliet suicide pact, which had no emotional impact.Lee Grant gets so hysterical by the return to Hamburg that she cuts her hair, which earned her a Best Supporting Actress nomination. 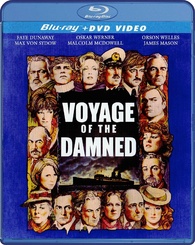