“This enjoyable romp through Russian history is a visual delight.”

The second part to Sergei M. Eisenstein’s ill-fated attempt at a trilogy on Russia’s first Tsar, the 16th century, Ivan the Terrible (Nikolai Cherkasov), is much more potent than the first part though still on shaky ground as far as historical accuracy. It was completed in 1946 but when seen by Stalin, who commissioned the film, it was disapproved. The communist dictator thought the part about the secret police hit too close to home and ordered changes before it could be released. Eisenstein refused to do the changes because he physically couldn’t, as he was incapacitated due to a heart attack, and also he didn’t want to choosing instead to futilely defend himself in front of Stalin’s board of censors. The film was shelved until 1958, ten years after the filmmaker’s death and five years after Stalin died. Khrushchev became Russia’s new leader in 1958 and permitted the film to be released as filmed.

It picks up from Part One with the less trustful Tsar returning to Moscow from his exile in Alexandrov with renewed support from the masses, who in a pilgrimage to his country home in Uglich urge him to resume power in Moscow. This comes after the Tsarina was poisoned by the Tsar’s treacherous boyar Aunt Euphrosyne (Serafima Birman) andhis best friend Prince Andrei Kubsky, his military leader, deserts him and plots against him from Poland, leaving the fragile orphan alone and melancholy. The Tsar is also dealt another severe blow when his former friend Fyodor Kolychev, now Philip the Monk (Andrei Abrikosov), deserts him by siding with the boyars. Ivan then gives in to his commoner loyal advisers and allows the Oprichniki, a secret police network, to eliminate his enemies by any means. Aunt Euphrosyne, realizing it’s either the boyars or the Tsar, concocts a plot to have the pure-hearted Peter (Vladimir Balashov) assassinate the Tsar during a banquet and plans to put her mentally challenged son Vladimir Volynets (Pavel Kadochnikov) on the throne. The duplicity is foiled by the shrewd Tsar, and the aunt’s son, dressed as the Tsar, is mistaken for him and assassinated by Peter. From here on, the Tsar ruthlessly carries out his aim to drive all foreigners from Russian soil and to unite the country under his command, reconciled to accept being known as Ivan the Terrible if it means ridding the country of all his foreign and inside enemies. The last reel was shot in color, as the negatives used were stolen from Nazi troops.

This enjoyable romp through Russian history is a visual delight and Cherkasov’s intensely stagy performance was a mesmerizing combination of camp and gloss. This operatic visualization, despite its lapses into comical melodrama, gets across the rift that divided the country at the time over its choice between an all-powerful dictator and a continuing corrupt anarchy that favored the insider aristocracy. 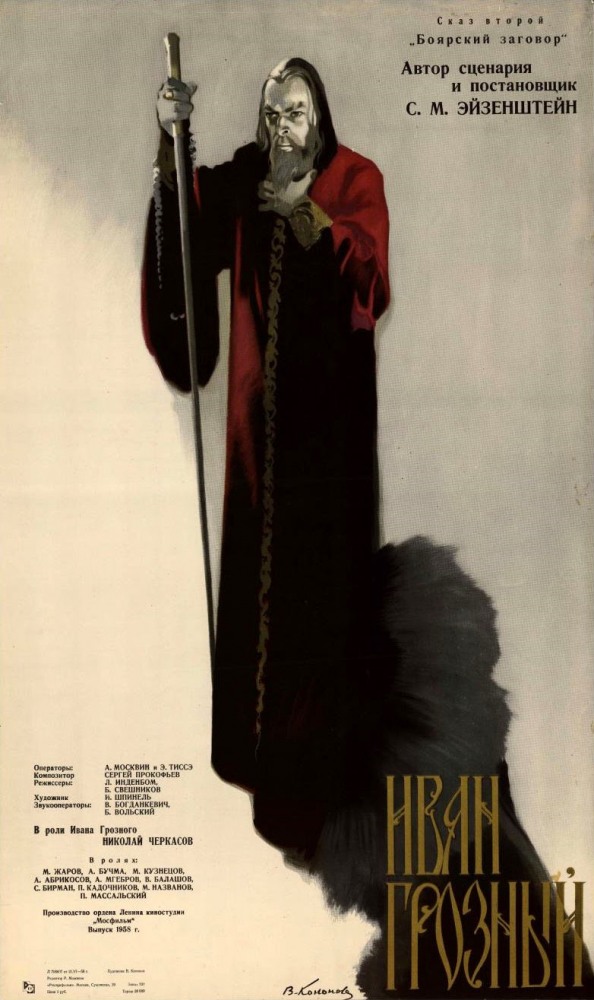