“Made for those who like those old-fashioned serial chapter adventure stories.”

Mark Robson has a good time directing this fairly entertaining but not historically accurate WW11 adventure film that is adapted from David Westheimer’s best seller of the same title. It looks like another Bridge on the River Kwai as its solemn opening is set in a WW11 PoW camp, that is until the action sequences kick in and it becomes frenetically paced and loaded with one cliff-hanger scene after another.

Captured American Air Force pilot Joseph Ryan (Sinatra) is shot down and placed in an Italian PoW camp that houses mostly Britishers. The camp is suffering from a lack of food and medicine and bad living conditions due to penalties imposed because of frequent escape attempts. Ryan, because he’s now the prisoner of highest rank, wrests command from the cranky British leader, Major Eric Fincham (Howard). Opting for good health over escape, the arrogant Ryan makes deals with the enemy to get immediate relief and thereby is tagged with the unflattering nickname by the Brits of “Von Ryan.”

When Italy surrenders to the Allies, the Italian jailers desert and the prisoners are left on their own. Guessing that the Germans will soon occupy Italy and take over control of the prison camps, under Ryan’s command the prisoners escape from Italy by stealing a German “prisoner of war” train heading for a German concentration camp and divert it northward to neutral Switzerland and freedom. When the Germans realize what has happened, the chase is on.

The film is all about these action sequences that include the escapees masquerading in German uniforms to get past the checkpoints, an encounter with a double-dealing Gestapo agent, an attack on the central railway control tower at Milan, and the concluding battle set in the Alps with their train on a fragile viaduct while the prisoners attempt to get the tracks cleared and at the same time fight off attacking German aircraft and also their oncoming German pursuers. Action ready-made for those who like those old-fashioned serial chapter adventure stories once regularly featured as part of a Saturday matinee and don’t mind a story that is so ordinary and a plotline that is so unbelievable and characters who are merely cardboard cutouts. 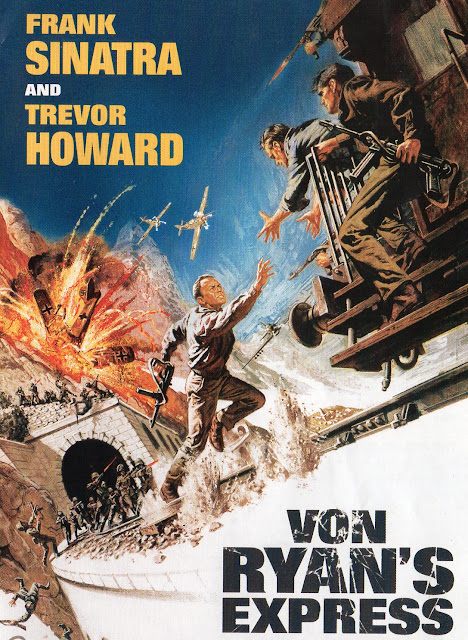