“With big holes in its drab and predictable storytelling.”

Jack Bernhard(“Blonde Ice”/”Unknown Island”/”Decoy”) directs this propaganda crime drama about a group of war veterans from WW II who are victimized by a hate group spreading bigoted discord while posing as a legit veteran’s group. It’s written by Stanley Rubin and Lewis Lantz to convey a message about the current unrest in American society among many veterans who feel left out of the current economic boom is justified if not done for criminal reasons.

View magazine journalist Ann Dwire(Nancy Coleman)takes an undercover assignment as Ann Mason to infiltrate the United Defenders, located in LA, that pretends to be a patriotic organization fighting for veteran rights but is comprised of thugs and extortionists who are running a scam.The group is headed by the murderer smoothy scam artist True Dawson (Emory Parnell), an oily fire-brand orator of hate, and his cold-blooded enforcer Fred Stalk (Sheldon Leonard) and the aide-a simpleton hitman named Joker Robinson (Peter Whitney). In reality they are a Fascist front. They prey ondisillusioned war veterans and fill them with bigoted filth and fear about their future, as they pretend to work to get them jobs, houses or government benefits while at the same time attacking the government, unions and management.

When Ann is told it’s time to return to the magazine, she’s injured getting there while in a taxi crash and selectively loses her memory. The undercover FBI agent Steve Fuller (Michael O’Shea) who was tailing her, then pretends to be engaged to her and tries to convince her to get him a job at UD. But she still only remembers working for UD and returns to tell them about the FBI agent and his plans to close them down. Even though Stalk is romantically interested in his secretary Ann, he agrees with Dawson to murder her and the agent, as the thugs figure out that the UD has been infiltrated by the law and the scam might be over.

The physical violent part of the B film crime drama is reserved for the climax, as a fight takes place in a vacant lot between the UD haters and the loyal GIs.

There’s also a strange scene that has the wife (Cay Forester) of a missing veteran who works for UD show up at the group’s headquarters and finds her hubby murdered by the UD goon Joker when he was about to expose them as a dangerous organization.

The most convenient scene has Ann regain her memory when Stalk knocks her out.

There’s both good acting and action sequences, but is sunk with big holes in its drab and predictable storytelling.It’s still a decent minor film, as it provides a necessary but unfortunately muddled social commentary on the post-war rise of anti-Semitism, racism and labor strife. 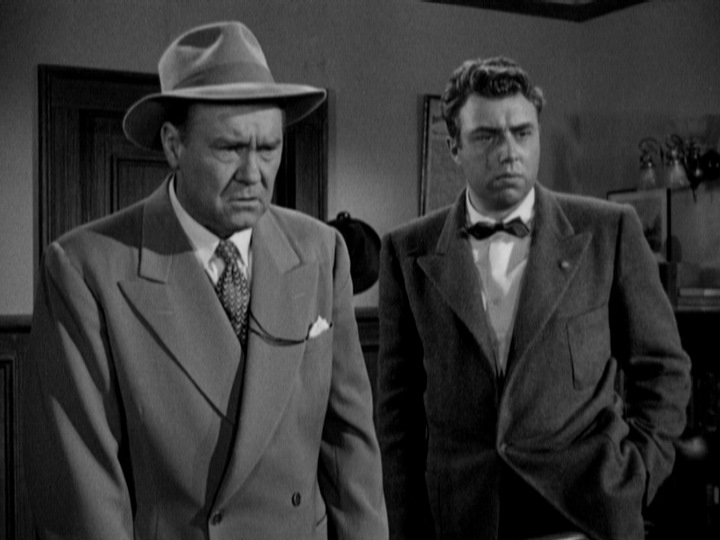