RIDERS OF THE PURPLE SAGE

“A solid standard action-packed Western that features a fast-draw cowboy after some mean-spirited outlaws.”

Previously filmed in 1918 with William Farnum. There’s a later version in 1931 with George O’Brien. Tom Mix is very well-suited for this action role, though the others were also excellent. It’s a solid standard action-packed Western that features a fast-draw cowboy after some mean-spirited outlaws, a number of different type of villains, a cattle stampede and an avalanche. The silent film is based on a melodramatic Zane Grey novel written in 1911, and is directed with verve by Lynn Reynolds, Tom Mix’s favorite director, and scripted by Edfrid A. Bingham. It was lushly filmed on locations at scenic Lone Pine, California.

Tom Mix is easterner Jim Carson who becomes cowboy Jim Lassiter when he learns from the dying Frank Erne that his wife Millie (Beatrice Burnham), Lassiter’s sister, and their young daughter Bess were kidnapped by crooked attorney Lew Walters (Warner Oland, future Charlie Chan) and his henchmen Herd, Slack and Metzger. Lassiter dedicates himself to hunting them down. After many years on the trail, he locates Walter’s three hirelings in an end of the desert trail frontier saloon and kills them in a gun duel. He learns from one of the dying men that Millie is being held in the Cottonwood ranch owned by Miss Jane Withersteen (Mabel Ballin). But soon learns from Jane that Millie died when she couldn’t bear it anymore that Bess was taken from her, and she made Jane swear that anyone looking for revenge should not know the new identity of Lew Walters. Lassiter takes the job of foreman at Jane’s ranch and teams up with honest cowhand Bern Venters to stave off crooked neighbor rancher Tull from rustling Jane’s cattle and causing a stampede. During a raid on the ranch they thwarted Venters wounds a masked rider who turns out to be Bess–now a teenager. She was given to outlaw Oldring by crooked Judge Dyer (who is really Lew Walters), who didn’t want to pay for her upkeep. Oldring is the elderly leader of the gang known as the Riders of the Purple Sage, and becomes a father to Bess. When Venters learns this, it clears the way for the two to get married.

Tull acts to get even with Jane for stopping his rustling activities by getting Judge Dyer to rule that the orphan girl Fay, whom Jane is raising, is to be handed over to another couple for adoption. Jane breaks her promise to Millie and tells an angered Lassiter who Dyer is. Lassiter marches into Dyer’s courtroom and shoots him dead when he tries to draw. Outside the court Tull’s men chase Lassiter, Jane and Fay over a secret mountain pass, and in order to save Jane’s life Lassiter sends a boulder crashing down the mountain causing an avalanche that kills Tull and his men but prevents the three from ever leaving the fertile valley. The place is viewed as paradise, away from all the ugliness and strife of the Southwest in the 1880s, asthe family of three vows to live in peace and happiness here for ever after. 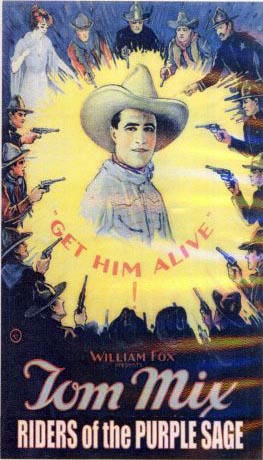