“It sets a scary sylvan atmosphere but provides few frights and lots of unintentional chuckles.”

M. Night Shyamalan’s (“The Sixth Sense”/”Signs”) The Village never amounts to more than a second-rate fright story with Roger Deakins’s spooky cinematography ably providing the moody visual effects and James Newton Howard the fright background music. Shyamalan has become known as a stylistic director who shuns computer special effects and a director whose films live only for his trademark surprises, and this film is no exception. It sets a scary sylvan atmosphere but provides few frights and lots of unintentional chuckles, with its main purpose seemingly to deliver arcane messages about urban violence, following a false leader, homeland security and alienation. Its more overt purpose is a more honest one, telling of the pleasures there are in living a simple peaceful life, the sublime beauty found in the self-sacrifice for personal love, and the benefits of living harmoniously in a community. The problem is that these worthy themes get lost in the gimmickry nature of the plot devices and the drama never kicks in as it should have.

The mystery evolves around the withdrawal from society by a small group of residents in the isolated unnamed rural village near Covington, Pennsylvania. At a recent village funeral in 1897, the young boy of a village elder is buried and afterwards the entire village gathers together for some words of sorrows and to chow down at a banquet. The film suggests that the group of villagers might be comparable to the Amish though apparently without their formal Christian leanings. Both groups dwell in a self-sustained community without modern conveniences.

One of the strictly enforced rules is that no one ever leaves the village for the town without the permission of the elders nor is one permitted to wander off into the surrounding woods for fear of provoking the creatures known as “those we don’t speak of.” There are yellow banners hung from the watchtowers and burning torches at the edge of the village indicating it is forbidden to cross that boundary line into the woods (reminding one of either The Twilight Zone or the yellow danger alerts used by homeland security). The village elders have a shadowy agreement with these creatures of the woods: “do not to come to our village, we will not come to your woods.”

Edward Walker (William Hurt) is the trusted married leader of the village, a former city dwelling history teacher who, after a family tragedy, helped form this cult with a number of other families who have suffered similar tragic fates; such as the widows Mrs. Alice Hunt (Sigourney Weaver) and Mrs. Clack (Cherry Jones), and the stout widower August Nicholson (Gleeson). Kitty (Greer) is one of Walker’s vibrant daughters. She’s in love with Lucius Hunt (Joaquin Phoenix), an earnest quiet young man who hardly speaks. He rejects Kitty and loves only her tomboyish blind sister Ivy (Bryce Dallas Howard – daughter of director Ron Howard in her movie debut). Ivy and Lucius have a playful relationship with the village idiot Noah Percy (Adrien Brody), who loves especially to play boyish games with Ivy.

The headstrong Lucius bravely goes into the woods to test the truths passed on to him by the elders despite being warned not to by his widowed elder mother Alice. Lucius’s rash actions are related by the elders to their livestock suddenly turning up skinned and the doors of all their houses marked with red slashes–a banned color (symbolizing blood and gore) because it both upsets and attracts the mysterious creatures. Fear keeps the villagers from the woods and obedient to the rules laid down by the elders. But despite trying to keep tragedy out of their safe haven, Lucius gets critically wounded and to save his life the pure Ivy is given permission by her dad to cross the woods and go to town to bring back medicines. Crossing the dark woods to save a loved one and returning with the right medicine (love!) is seen as a chance for the village people to find a new hope for what’s missing in their somber life.

This solemn movie plays like a farfetched ‘little yellow instead of red riding hood’ fairy tale that is too ridiculous to be taken seriously and too serious to be taken as silly fun. Everything seemed out of place from a bum narrative, lame acting, stilted dialogue, dumb secrets and a tiresome one-trick pony scenario. The village’s concept of innocence loses its meaning when it can no longer keep out the horrors of the outside world they are trying to escape from. Supposedly this will be a metaphor for one to think more carefully about–blindly following any leader, no matter how well-intentioned they seem. Also, I guess there’s something to be said about relating the Edward Walker character to President George Walker Bush and the way they both manipulated fear to create a divided world of the ‘good guys (us) versus the bad guys (them).’ If that is indeed Shyamalan’s intention, it’s too much of an artificial ploy to be convincing. As it stands, the touching love story never had a chance to be fully realized as real but only as an overly intellectualized and passionless allegory. 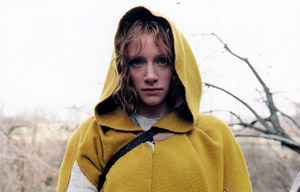