A well-intentioned but nevertheless unimaginative and dreary biopic on welterweight boxing champion Barney Ross (Cameron Mitchell). It’s helmed by André De Toth (“Man in the Saddle”/”House of Wax”/”Pitfall”). It’s adapted from Ross’s autobiography and the screenplay is by Paul Dudley.

It chronicles Ross’s thrilling championship days as a boxer, his reckless gambling habits, his marriage to nice showgirl Cathy (Dianne Foster) and finally his struggle with a drug addiction. When finished as a boxer it takes us through his wartime heroics as a marine fighting the Japanese at the jungles of Guadalcanal (won a Silver Star award), who comes down with malignant malaria and is given morphine as a treatment and becomes addicted to the drug. The heart of the film has him at home and trying to fight his drug addiction with the help of his wife and friends. With the most intense scenes of him at the Federal hospital in Lexington, Ky., going through the “withdrawal” period of his cure.

Mitchell gives a solid and sincere performance as a battler going through the fight of his life to get the monkey off his back and save his marriage. Though De Toth avoids being preachy, everything else is standard melodrama, dialogue and plot line. It was hard to go the distance with this fight pic that got into too many clinches and in the end seemed better as a public service announcement to save others from a drug addiction than a winsome melodrama.

Barney Ross served as technical adviser for Monkey on My Back; the cured drug-addict ended up suing the producers for defamation of character—and lost. 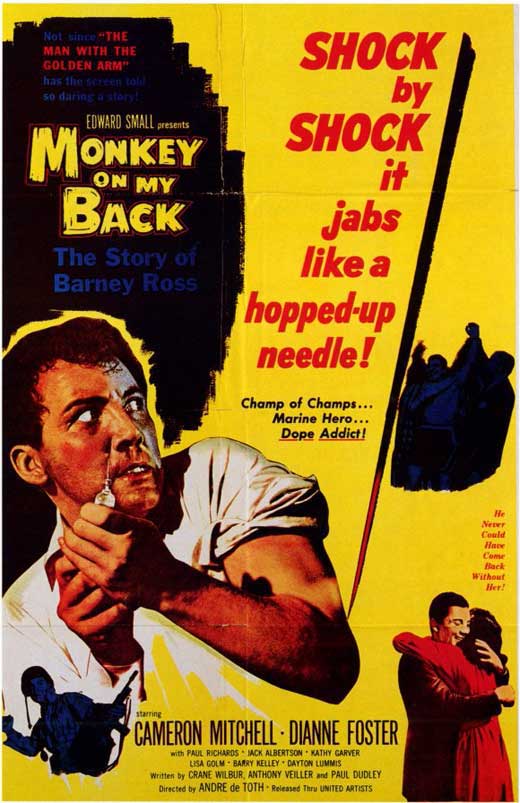