“At least you can’t get a sexually transmitted disease by just watching such trash.“

Sexploitation cult flick that’s dull, sleazy and violent, and seems like a B-film despite given the A-film big budget treatment. Gary A. Sherman (“Dead &Buried“/”Big Jake”/”Death Line”) flatly directs this thriller as if it was a TV cop series allowed to go R rated.It’s written without any sense of worth bySandy Howard, Robert Vincent O’Neil and Kenneth Peters. The action takes place over the course of one night. The best thing I can say about it, is at least you can’t get a sexually transmitted disease by just watching such trash.

Sadistic pimp Ramrod (Wings Hauser), dressed in cowboy gear,beats LA prostitute Ginger (Nina Blackwood) to death in a motel room when she ran away from him and mutilates her vagina with a wire coat hanger.Princess (Season Hubley) is an LA business woman who moonlights as a hooker (using no pimp) to support her young daughter. When caught plying her illegal trade, the whore with a heart of gold is forced to make a deal with the cops and go undercover wearing a wire so that the Vice Squad get the proof the psychopathic pimp is indeed a pimp. Princess is under the protection of gung-ho crusading undercover cop Tom Walsh (Gary Swanson), who heads the Vice Squad team. The vicious pimp is arrested, but escapes vowing revenge on Princess for setting him up. Princess is unaware of his escape and is seen with her johns until taken captive by the crazed pimp with the Vice Squad in pursuit.

Hauer makes for a good meanie pimp, while Hubley holds our attention as a damsel in distress–convincing us that whores are also human beings (for those who needed such reassurances).

It’s based on real Hollywood vice cases, as it was one of the early films that tried capturing street life for the police.Yet it still feels fake. Kubrick’s favorite cinematographer John Alcott brings out the gritty nightlife scene on Hollywood’s Sunset Boulevard with his usual observant excellence, allowing the film to look better than the seamy uninspiring TV-like production that it turned out to be. 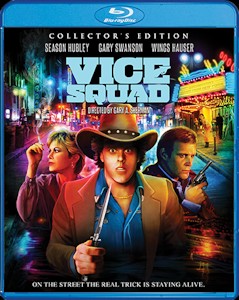