“Strictly for the fans of Mickey Rooney and Judy Garland, and those with a soft spot for vaudeville.”

This loosely based peppy but artless version of the Rodgers and Hart backstage musical is strictly for the fans of Mickey Rooney and Judy Garland, and those with a soft spot for vaudeville. Mickey and Judy belt out the Rodgers and Hart tune “Good Morning.” Other songs include “The Lady Is a Tramp,” “Babes in Arms,” “Where or When,” “You Are My Lucky Star,” “God’s Country,” “I Cried for You,” “I’m Just Wild About Harry,” “Ida,” and “My Day.” Director Busby Berkeley (“Babes on Broadway”/”Strike up the Band “/”For Me and My Gal”) keeps it bouncy and light.

The plot has Florrie (Grace Hayes) and Mickey (Mickey Rooney), the showbiz-inspired children of has-been vaudeville troupers Joe and Florrie Moran (Charles Winninger & Grace Hayes), put on a show in their hometown of Seaport, Long Island, to avoid having the showbiz’s community of hard-pressed parents lose their homes and their children taken from them to be placed in a state work school to learn a trade. The bad times come for the old troupers because talking movies in 1929 replaced vaudeville, and there’s no work for them; the entertainers leave their children home to go on a road tour in the sticks in order to see if they can make a comeback. The energetic composer Mickey, born backstage at New York’s Palace Theatre, writes a show to be presented by the kids of the old vaudevillians. His main squeeze, Patsy Barton (Judy Garland), also the daughter of troupers, sings the songs Mickey composes.

The film’s heavy, Martha Steele (Margaret Hamilton), head of the welfare board, presses kindly village Judge Black (Guy Kibbee) to carry out her scheme to rid the town of the showbiz folks. He instead buys tickets to the show and refuses to act against the kids.

Douglas McPhail uses his rich baritone voice to sing in the show, while June Preisser, a former child star known as Baby Rosalie, tries to use the show to make a comeback as a glamor gal. Her appearance upsets Patsy, as she flirts with Mickey. Just in the nick of time, despite all kinds of trouble getting the show through a hurricane and when Mrs. Steele is about to win her battle to get the kids in a work school, Harry Maddox (Henry Hull), a big-time New York producer, lets Mickey know that he will stage the show on Broadway.

This was the third of eight (ten if you include the MGM all-star extravaganza Thousands Cheer in 1943 and Words and Music in 1948) Garland-Rooney musicals; it battles against a tired plot, but the music is just fine and it provides some lively but simple-minded entertainment. “Babes” retained only three of the show’s original songs – the title song, “The Lady is a Tramp” and “When or Where.” The movie’s plot was also greatly changed from the stage version to add screen time for Rooney’s part, in fact he dominates the pic. 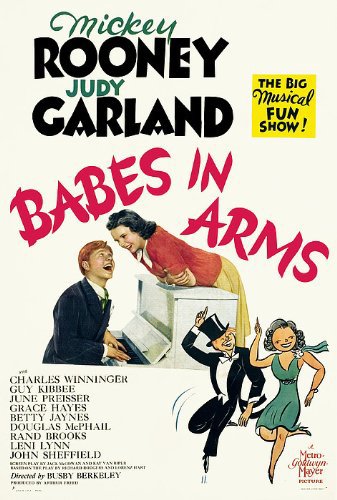