VERTICAL RAY OF THE SUN, THE (Mua he chieu thang dung)

A slow and deliberate story examining the lives of three sisters brought up in a traditional bourgeois family in contemporary Hanoi, that is told in a uniquely dazzling high-brow soap opera style. Tran Anh-Hung (Cyclo/The Scent of Green Papaya) presents a delicious visual feast accenting the rituals of daily living, in a film that has spectacular color tones while also setting a deepening hypnotic sensual mood that lingers throughout. It speaks in an expressive cinematic language that questions the Asian axiom of “saving face,” as the film turns to melodrama to delicately put pin pricks in the marriages of the two elder sisters.

The three sisters are preparing the traditional meal celebrating the anniversary date of their mother’s recent death. Their father, who was one month younger than his wife, died one month after she did. The three sisters are Lien, Suong, and Khanh: the youngest, the innocent and playful Lien, and the two older married ones. The youngest shares an arty apartment with her aspiring actor twin brother Hai. They wake up to Lou Reed songs and flaunt a near-incestuous relationship: sleeping together in the same bed, horsing around together in an erotic way, and are seemingly proud that passers-by who see them together take them for a couple. The other two sisters appear to be happily married, but as the dream-like story unfolds this harmonious family seems to have some dis-harmonies that are kept under wraps. Suong has been married for the last 4 years to a sullen photographer Quoc, whom she has a young child with she affectionately calls Little Mouse; while the resilient Khanh is married to a moody writer, Kien. He has been doing research on his latest book and has a source in Saigon that reveals his wife’s mother had an affair while married. The sisters want him to stop the research, but he has a case of writer’s block and believes by going to Saigon he can continue that research and clear his head to finish his novel.

The story moves from the extended family celebrating their mother’s death to a month later the sisters preparing to do the same celebration dinner for their father. In the intervening time the story explored the emotional problems in the two marriages and secret affairs taking place and being covered up by them, while Lien has her coming-of-age adventure to tell. As all the stories unfold, the family harmony is kept intact by the strong bonds the sisters have for one another despite the troubling nature of the secrets and scandals disclosed.

A fascinating film. One that sparkles with intelligence, wit, sensibility, and sensuousness. It looks and feels like a dream. 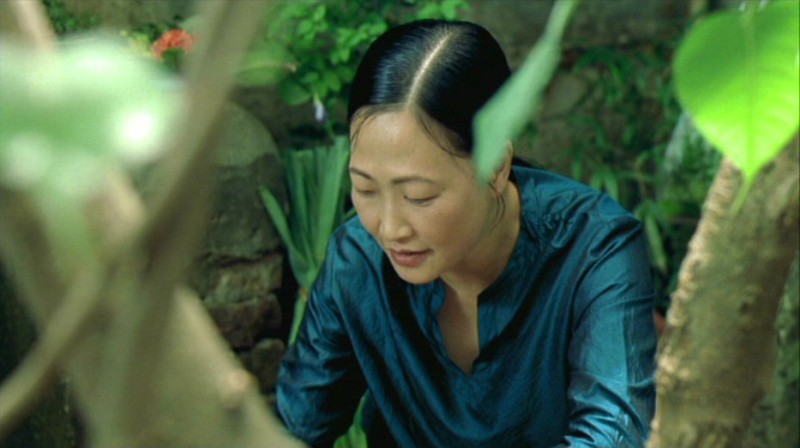