“The pairing of Lorre and Greenstreet is always entertaining.“

The directorial debut of Don Siegel (“Riot in Cell Block 11″/”Invasion of the Body Snatchers”/”Dirty Harry”) was the eighth and final film teaming of Sydney Greenstreet and Peter Lorre.The routine crime drama, a studio-bound film set in a foggy Victorian England with Hollywood sets, is about a police officer who takes the law into his own hands to achieve justice (which became a familiar theme of Siegel’s). The Verdict is the second film (The Crime Doctor-1934 was the first) to be based on the novel The Big Bow Mystery by Israel Zangwill, and is smartly written by Peter Milne.

Respected superintendent at Scotland Yard, George Edward Grodman (Sydney Greenstreet), is forced to resign after thirty years of honorable service by his clueless boss (Holmes Herbert) when he sends an innocent man to the gallows on a case built solely on circumstantial evidence, and the clergyman (Arthur Shields) alibi arrives too late to save the hanged man executed in 1890 in London’s Newgate Prison. Grodman is humiliated and contrite, and plots to get his revenge on his rival, the arrogant John R. Buckley, the new bumbling chief. Grodman commits the perfect crime (the killer escapes from a locked room) and allows Buckley to convict the wrong man, the liberal MP, Clive Russell (Paul Cavanagh), for the murder on merely circumstantial evidence, by feeding him dubious clues. Just before Russell’s to hang, Grodman comes forth at the execution site to tell how the foolish Buckley is also about to send an innocent man to his death. The catch is that Grodman’s victim is the cad Arthur Kendall (Morton Lowry), the murderer who killed his aunt and let an innocent man die for the crime he committed. Kendall is the obnoxious socialite, who killed his aunt when she threatened to cut him off from her will and fed his next-door neighbor and friend Grodman wrong information on the case to frame an innocent man. Peter Lorre plays Victor Emmric, the genial decadent bon vivant artist friend of Grodman’s, who proves to be a sinister chap. Victor lived in the same house as Russell and Kendall, and had a dislike for Kendall that made him not care that he was murdered. After Grodman confesses, Victor is given the book he wrote about the murder and other cases handled by the sleuth during his long career and told to get it published to help others involved with the law.

Though unconvincing and a bit much as ‘the perfect crime’ yarn, the pairing of Lorre and Greenstreet is always entertaining and a welcome addition to any film despite the staleness of their comic relief act. 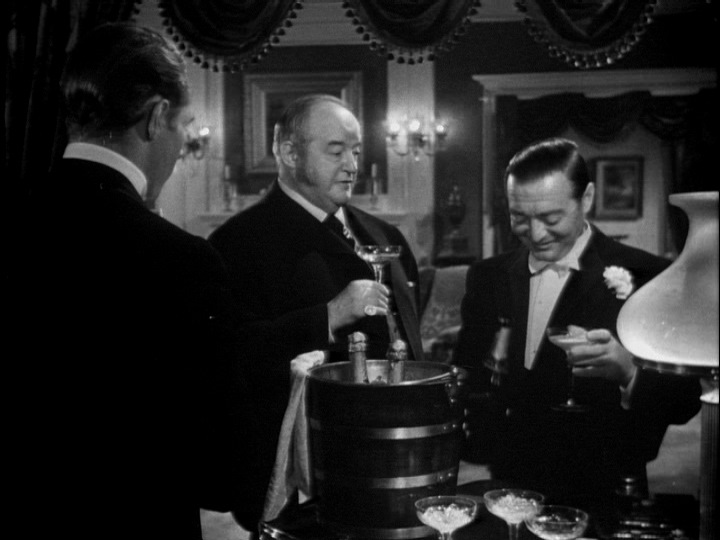