“This fictionalized story is a thin disguise for David Bowie’s bio, and it is a rip-off of the Citizen Kane way of telling a fictionalized biography.”

I’m not a fan of glam rock, my musical partiality is for classical music or ’60s rock or ragas from India or traditional folk/bluegrass music. I say this so that you should know that because of the film’s subject matter, it has one strike against it before I even see it.

Velvet is an entertaining and stylish celebration of the rock music scene by Todd Haynes (Safe/Poison), that has the right musical feel but offers little else that I found interesting. This fictionalized story is a thin disguise for David Bowie’s bio, and it is a rip-off of the Citizen Kane way of telling a fictionalized biography. Haynes, also, throws a bit of the Oscar Wilde cause célèbre into the picture. He is the patron saint for all such “rock dandies.”

Glam rock star Brian Slade (Jonathan Rhys Meyers) acts catlike as a character named Maxwell Demon and becomes noted for predicting his own death onstage. The death is found to be a hoax and his career is ruined. It is 1984, ten years after that incident, and a New York newspaper editor assigns a reporter, Arthur Stuart (Christian Bale), to see if he can dig up what happened to the rock star, sending him back to London the reporter’s place of birth and early triumphs.

The reporter interviews Slade’s first manager who is seen in a wheelchair (remember Joseph Cotten in Citizen Kane!), as he tells of how he was dastardly replaced by the flamboyant manager Jerry Divine (Brit comedian-Izzard). Arthur then interviews the star’s ex-wife Mandy (Collette) now a drunken burnout, as he tries to unravel the mysteries of the enigmatic performer. He looks back with her at what glitter glamor meant to Slade: how it meant wearing a mask so he can find out who he is and how it was the coming out party for a bisexual revolution. It also caused the wreckage of his marriage and his career (similar to Orson Welles’s Hollywood career going down after Citizen Kane).

The great love affair between Slade and an American performance artist, the junkie Curt Wild (Ewan McGregor), influenced Slade’s style. But she was seeing dollar signs in his eyes instead of the love that was in Brian’s eyes. It resulted in a ménage à trois among Brian, Curt, and Mandy, taking place in the swinging London of the 1970s.

The film works best as a music video and if you like the music, you’ll probably love the film. It was a colorful spectacle, wonderfully performed, very energetic, and it had some witty dialogue; but, it failed to tell a cohesive story and failed to capture that period of the 1970s. It was hard to tell what Haynes was trying to expose or tell about this fictionalized Bowie-Ziggy Stardust-like character. The film made no comment about the money angle in the business end of the music, or the public-or-the private thoughts of the musician. It was all vague and superficial, I suppose, just like glamor and rock music is.

When Mandy explains his downfall by saying he got lost in a lie, it is hard to feel any sympathy for him or for those he took down with him.

If you don’t mind feeling empty after a film, then this one could be your meal. There was some attempt to bring a deeper story line into focus, as the sexually inhibited reporter was actually in attendance on the night of Slade’s hoax; and, he was shown in flashback to be influenced by the performer’s sexual freedom, discovering his own bisexuality through the performance. The suggestion made was that these performers are role models and influence many teens–for good or bad. Unfortunately the film did not pick up on that thread of the story, as it continued on in its glitzy musical style. The last serious thing it said, comes in a conversation between Arthur and Curt in a grim local neighborhood bar where Curt says: “We set out to change the world–but just changed ourselves.” Arthur says, “What’s wrong with that?” Curt, “If you don’t look at the world.” Now, that’s deep, man! 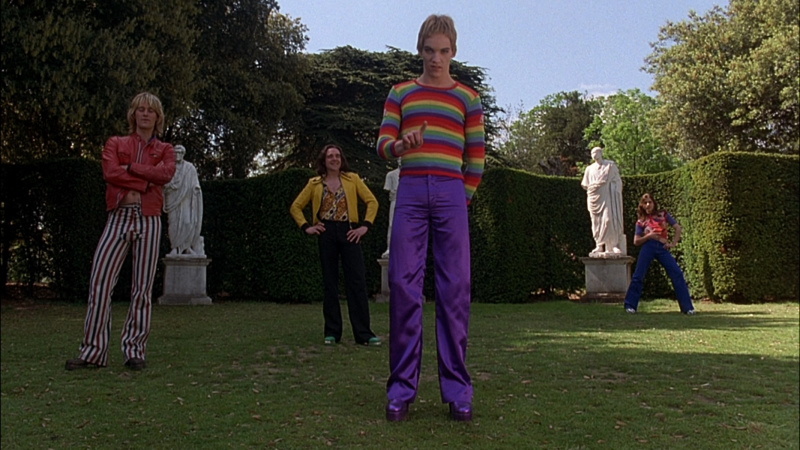