“This romantic psychological/sci-fi thriller is pretty to look at but basically empty inside.”

This romantic psychological/sci-fi thriller is pretty to look at but basically empty inside; it’s a remake of Spanish director Amenabar’s 1997 “Open Your Eyes.” Why it was remade is a mystery to me, since this big-budget film is neither better or worse, and offers nothing new except switching the scene from contemporary Madrid to New York City. It still is stuck with the basic theme of dealing with male vanity: that good looks and having plenty of money count for everything in this world. There’s a sci-fi addition to this vanity theme (same as in the original), that if you have the money you can buy into a questionable corporate science program that gives the promise of eternal life. The sci-fi part seemed like a lot of psychobabble and failed to elevate the film. It only made the film look as if it was artificially painted with artistic ideas, as its carefully packaged style is accomplished through splendidly crafted visual effects which cover-up the film’s lack of depth.

The “Vanilla Sky” (the title refers to a Monet painting) director, Cameron Crowe (Almost Famous/Say Anything/Jerry Maguire), expands his youth orientated film horizons with a film that offers meatier subject matter. But his work here only convinces me that he can make a chic, mischievous and stylish romantic film, but not necessarily a great one. He could not go beyond the film’s fuzzy thematic prospects in this one, except to blur the visions of reality and dreams without coming to any meaningful conclusions.

This romantic fable centers around a cad who gets his comeuppance, as that is about what it all amounts to when all the sci-fi prattle is over with. It’s most like Kubrick’s “Eyes Wide Shut”, but without the skilled director’s experience in telling about relationships and his ability to mine its dream material for gold instead of gloss.

It’s a film that knows how to toy with the audience by playing mind games, but I found no intellectual or emotional payoff in going along with these sometimes intriguing games it played. It’s a long film that hits dull spots in the middle, and the pedantic mechanical explanation of the mystery in the film’s last fifteen minutes ruins any flow it had and stops any chance of allowing one to think for themselves what the visions in the afterworld it hints at would entail. Though, the original had no advantage in its more evasive ending.

Tom Cruise plays David Aames, a narcissistic role that is right up the Top Gun actor’s cool sleeves. He’s a vain, 33-year-old, playboy bachelor tycoon who inherited a mega- publication empire when his parents’ car crashed in a New Year’s Eve accident. He has 51 percent control of the company and contemptuously calls the board who controls the other 49 percent the Seven Dwarfs. They oppose his indifferent attitude to the business, his hedonistic lifestyle, and call him contemptuously behind his back, Citizen Dildo. He lives in a luxurious Manhattan Upper West Side duplex, and we first meet the spoiled womanizer while he’s in bed with the luscious Julie (Cameron Diaz). She is thrilled that he made love to her four times that night and hides her love for him by saying they’re just friends and fuck buddies, as she’s afraid if she told him how deeply she really feels she would scare him off. He icily rushes out of their warm bed to go to a health spa with the only friend he has, Brian (Lee), a book author on his payroll, and purposefully manages to come fashionably late to his board meeting — which only increases the polite friction recorded between both sides.

At David’s birthday party in his fashionable but uninspired decorated place, attended by the notables he employs, he ogles the sweet and innocent dancer Sofia (Penelope Cruz, who played the same part in “Abre los Ojos”), who happens to be Brian’s date. She’s another beautiful object for him to possess, as the parasitic Brian tells his mealticket friend that this one I just met today — but I really love. But that doesn’t stop David from flirting with her and going to her modest apartment where he stays all night, and he enjoys himself by just talking without sleeping with her. As a result of this rare platonic one-night stand, he falls in love with her (a night of chastity seems a deeper love commitment in this flick than a night of sexual prowess).

But the uninvited Julie crashes his birthday party and notices him going for Sofia, and jealously follows him to her apartment. When he emerges at dawn from Sofia’s, she offers him a lift and vents her jealousy while asking: Do you believe in God? What does happiness mean to you? But before those questions could be answered, her speeding car goes into a suicide dive over a West Side bridge and into a brick wall killing her and leaving him with a monstrously disfigured face.

We see David in jail, charged with manslaughter, talking to his prison shrink, Dr. McCabe (Russell), while in a latex mask and complaining of severe headaches, trying to figure out what is real and what is a dream that turned into a nightmare. The surprises come when David gets surgery to restore his good looks, but we are never certain until the film’s end if this is so or if it’s part of his dream. During time with his shrink, the film intercuts from the past to the present so that it’s hard to tell what tense we’re in.

In one dramatic scene David goes to a disco with Brian and Sofia, at first wearing the mask then in a daring gesture he wears the mask in the back of his head so that both the masked face and his disfigured face are seen (he becomes compared to a mythical Janus figure). When drunk and in a self-pitying rant, he’s left abandoned on the gutter after walking Sofia home with Brian.

The story after that melodramatic scene somehow leaps into a fantasy sci-fi mode and the conventional storytelling ends, and as a result the film loses its emotional grip and things become awkwardly confusing. Abstraction takes hold, to the film’s detriment.

The film had numerous flaws, not the least being why David would choose an airhead like Sofia over the ravishing Julie. That would in my opinion, be a reason for him to see a private shrink. Cameron Diaz stole this film as far as giving an emotionally gratifying performance, being the most attractive one in the film, and of showing that she’s the same type of energized and ambitious compulsive as Cruise (she mopped up the screen when Tom and her were together, and there seems to be no logical reason why they weren’t a more permanent heavenly yuppie duo making the Big Apple glamor scene). Tom is the glittering star the film revolves around and his performance fits his egocentric personality to a tee. Ms. Cruz’ main problem is not in failing to convey her innocence and lack of guile, which she does very well, but that she can hardly speak English and therefore there was no breathe in her performance only a noticeable struggling with her lines.

Vanilla Sky is a sensual experience, but is as bare as the cover of the Beatles White Album (it amazingly draws not one ounce of insight into all the intrigues it raises). It’s big on background music of classic rock from back when, such as the Beach Boys, R.E.M., Peter Gabriel, and Bob Dylan.

It’s a star vehicle commercial film that I would not totally dismiss.

There’s one amazing shot, meant to be part of a dream sequence, early in the film, of Tom Cruise driving his fancy Mustang down Broadway and stopping to be absolutely alone in a deserted Times Square (something that seems impossible). This was a real location shot and not done by computer graphics, which makes for an eerie atmospheric shot.

The story — which might be, after all, just a story about a troubled dreamer waking up, leaves a lot to be desired. Clarity is not part of the agenda here, which is neither a good or bad thing in itself; only, I wanted a little bit more meat on my plate before I bit into this excessive fantasy. 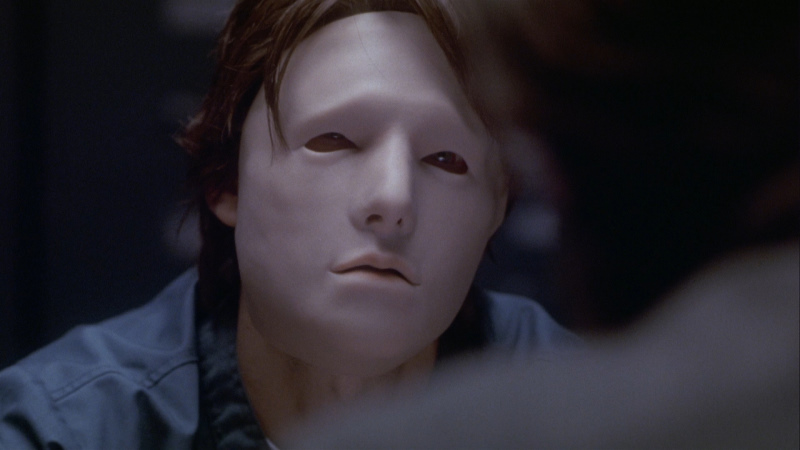