“A minor horror chiller that is well-acted, but seems more amusing without trying to be than scary.”

A minor horror chiller that is well-acted, but seems more amusing than scary. It tried to demystify the vampire legend. The Vampire hones in on the 1950s American paranoia about foreign invaders (in this case a strange serum created in the lab) and comes to the reactionary conclusion it’s better to trust the cops than the men of science — they have too much brain-power and their research could lead to too many risky changes. Though, the men of science who conform are acceptable in the film’s idealized Middle American small-town. The film implies that isolation from big cities and the rest of the world is the only way to secure a peaceful setting.

The film opens as a pet shop delivery boy enters the unlocked Victorian house of research scientist Dr. Matt Campbell with another animal for him to experiment on — his lab is filled with bats and a variety of animals in cages. The kid discovers that Campbell is feeling faint with his head resting on his desk and has requested Dr. Beecher (John Beal). Campbell dies, but gives Beecher the magical pills he was working on in his secret experiments on instinctual regressions.

The overworked widower, Dr. Beecher, is getting migraines, and before he sees his next patient, Marion Wilkins, he gets his adolescent daughter Betsy to give him his headache pills. By mistake she gives him the pills Campbell gave him. It turns out that these pills contain an extract of serum from vampire bats that Campbell was experimenting on. The doctor gave only the animals the pills, since they are instantly habit forming and have proven deadly by killing all the animals except for the bats. The pills turn Beecher into a vampire whenever he has a craving for the pills, which happens at least once every day. Beecher like the bats develops an immunity toward the pills, and he is able to live a productive life until he gets those vampire cravings.

Beecher’s first victim is Marion Wilkins. The doctor suspects he might have killed her, but can’t remember what he did that night after taking the pills. When the head psychologist, Dr. Will Beaumont, from the next town’s university arrives to assign a replacement for Campbell, Beecher hangs around the lab questioning both Will and his sun-glasses wearing, laconic, quirky assistant, Henry Winston (James Griffith). Henry’s a real asocial character and in his small part steals the picture.

But despite the Doc’s precautions, he can’t control his new aggressive urges and body changes (he turns into a wrinkled, shaggy monster-man). In the next three days there are three murders. In these three deaths, it’s discovered through Buck’s vigorous investigation and call for autopsies that all the blood was drained from the bodies. I guess that proves it must have been a vampire! It now comes down to see if the cop can stop the vampire before another fine citizen is drained bone dry.

My only wish for this silly but enjoyable film, was that James Griffith had a bigger part. 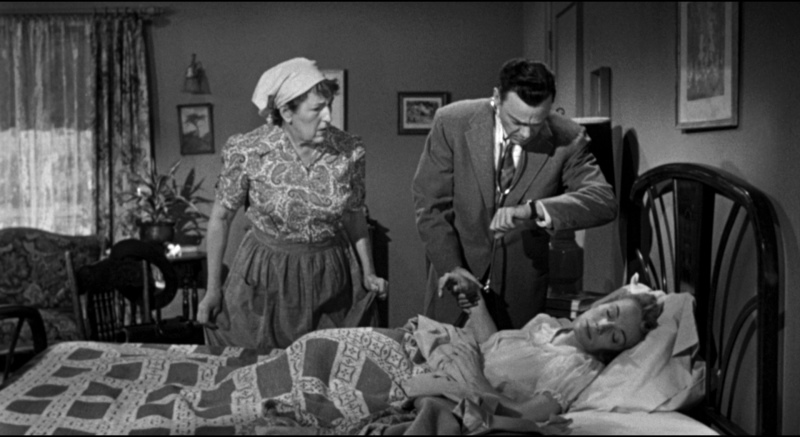