Klezmer is the Yiddish word for the Jewish folk music of eastern Europe, a joyous music that is a fusion of gypsy music, Jewish liturgical music, and the typical musical forms of Eastern Europe, including the polka. It’s played by a small band of itinerant Jewish folk musician, who traditionally perform at weddings or for temple functions. It had nearly died out by the mid-1990s when a modest revival of interest, especially among the young, began to hold promise that it might survive.

San Diego-based klezmer revivalist author and violinist Yale Strom directs a conventional, bitter-sweet, stirring documentary about the 70-year-old Leopold Kozlowski, a gifted Jewish musician and survivor of the Holocaust. The musician looks back at his past in Poland visiting his former home, a small town in the Ukraine called Peremyshlyany, and the sites where his parents and brother were killed by the Nazis. He sadly tells about surviving in the death camps, being forced to play tangos for the SS while the inmates were marched to their death. Vividly he recalls his escape to live in the woods and become a partisan soldier. On a happier note, he reunites in his home town with a camp survivor he hasn’t seen in 50 years.

Kozlowski lives in Krakow and teaches Yiddish music to young Poles, who accept it as an ethnic folk music peculiar to their region. He’s a well-known pianist, composer and teacher, who for 23 years was conductor of the Polish Army Symphony Orchestra.

The lively and soulful music of the klezmer keeps things moving in an upbeat fashion to counter the sadness of Kozlowski’s earlier life. After all, as Kozlowski says, “A wedding without a klezmer is worst than a funeral without tears.” 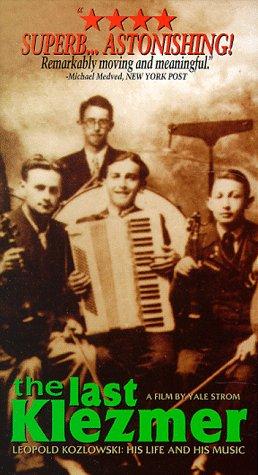