UP THE DOWN STAIRCASE

“Picks up where Blackboard Jungle (1955) left off–with more or less the same negligible results, except for the convincing realistic teaching performance by Sandy Dennis.”

Robert Mulligan (“Fear Strikes Out”/”To Kill A Mockingbird”/”Inside Daisy Clover”) directs a dated social drama about the failed educational system in America’s inner cities, that picks up where Blackboard Jungle (1955) left off–with more or less the same negligible results, except for the convincing realistic teaching performance by Sandy Dennis. It’s based on the bestseller by Bel Kaufman and is written by Tad Mosel.

Ms. Barrett tries to make inroads with the intelligent but sullen delinquent student Joe Ferone (Jeff Howard), who mistakes her interest in him for romance and makes an unwanted pass at her; the love-sick Alice Blake (Ellen O’Mara) who writes a love letter to her last year’s English teacher, Paul Barringer (Patrick Bedford), the wannabe writer who coldly corrects her grammar without paying any attention to her confusing state of mind and thereby pushes the vulnerable teenager to go suicidal and jump out the window; a hostile black student named Ed Williams (John Fantauzzi ), who becomes a dropout because he believes the bigoted white man rulers will never give him a break; and a timid Puerto Rican student named Jose Rodriguez (Jose Rodriguez), who never speaks in class but at the end of the school year surprises everyone when he confidently speaks.

At the end of the school year, Ms. Barrett believes she’s a failure and must decide whether to return next year or resign and teach in a private school. When the teacher finds she’s reaches at least one student, it becomes easier to make her decision.

All the students are stereotypes (we learn nothing of their homelife and only see them as plot devices), but all the school problems are only too real and need to be heard by the public–something this film accurately does (something Backboard Jungle could never do). The acting throughout is above average by this talented cast. 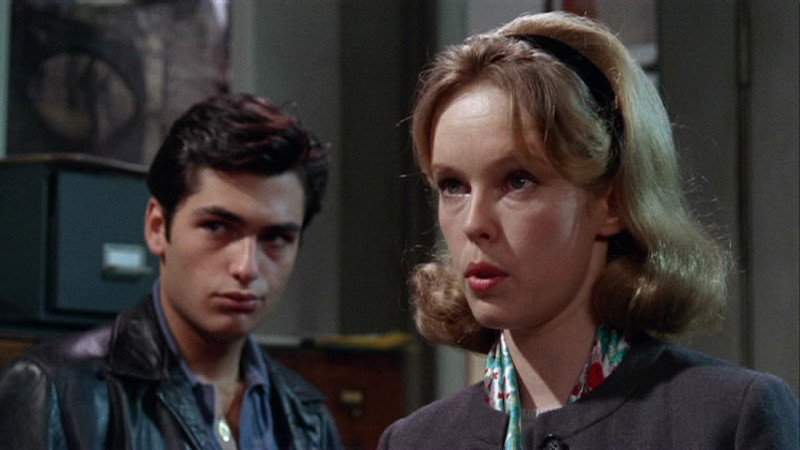