AT FIVE IN THE AFTERNOON (Panj E Asr)

“Didn’t enlighten me too much about contemporary Afghanistan.”

Director Samira Makhmalbaf (“The Apple”/”Blackboards”), the 23-year-old daughter of one of Iran’s most honored directors Mohsen Makhmalbaf, gets the title for her third film from the refrain of Lorca’s lament for bullfighter Ignacio Sanchez. It won the jury prize at Cannes. Mohsen Makhmalbaf co-scripted the film with his daughter. This visually stunning film (shot in the outer regions of Kabul, where the story takes place) is set during the post-Taliban period; it explores through an impoverished nomadic family the hopes and futility of a demoralized country still unable to recover from its long history of wars and a corrupt patriarchal society. The director doesn’t try to soften the unbearable reality of Afghanistan, its backward religious fervor, lack of literacy and poor economic prospects. It’s a film about desperate people who suffered from a dim past and face an equally dim future despite the recent liberation where men as well as women actually gained more freedoms. But the country is still unable to remove the cancerous effects of their political disease, ignorant mindset and inability to function in the modern world without more help. Unfortunately the rest of the world fails to provide enough humanitarian aid to prevent such deplorable living conditions as noted by the filmmaker (the country’s importance is diminished because there’s just no oil, only an abundance of poppy plants for heroin).

The simplistic tale about the human condition, much like a fable, focuses on Nogreh, an outspoken woman who, though illiterate, has unrealistic ambitions of being the nation’s first woman President (she bases her political ambitions on former Pakistani woman president Benazir Bhutto). Without her ignorant father’s knowledge Nogreh attends a secular school for women instead of the religious school he reluctantly gave her permission to attend. Nogreh lives in the ruins of a bombed-out plane with her widowed father, an Islamic fundamentalist, who believes it’s a sin if women are not completely covered in the presence of a man and her worried sister in law, Leylomah, whose truck driver husband Akhtar is missing while she is nursing a baby dying of malnutrition.

A flirtatious refugee returning from Pakistan tries to win Nogreh over with poetry (quoting Lorca) and not crushing her dreams about being President, as he gets his friend to take photographs of her smiling and looking serious for campaign poster pictures as he indulges her presidential ambitions (getting your picture taken and shown in public is still a daring thing to do in Afghanistan, especially for a woman). The film wasted a lot of uninteresting time over that and over a halting conversation with a French soldier, where Nogreh engages him because she wanted to know how the French president got the people to vote for him. It slowly moves along in a dullish pace without any sense of urgency until it arrives at the bleak conclusion where the father, who only feels comfortable getting things off his chest with a horse, takes the hapless women out into the desert in search of God knows what (a metaphor for Afghanistan).

In the final analysis, the minimal dialogue and plotless story didn’t enlighten me too much about contemporary Afghanistan, but it sure depressed the heck out of me. There were some lyrical moments, where a bitter truth sunk in that was brutally on the money. But the film couldn’t hold together for the whole journey with such a one-sided negative outlook, and though more ambitious than her other two films it nevertheless failed to inspire me as much as her others. 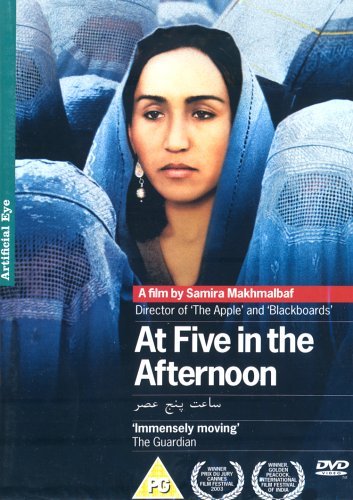