“Standard B movie directed with care by the always reliable Gordon Douglas.“

Standard B movie directed with care by the always reliable Gordon Douglas (“Saps at Sea”/”Them!”/”Kiss Tomorrow Goodbye”)and written byRichard H. Landau, who adapts it from a novel by Robb White.It starred the affableJames Garner, who was Maverick in the popular Western TV series from 1957-1962. Garner was paired with noted veteran actorEdmond O’Brien, an accomplished actor who brings to the slight film a powerful understated performance as the honorable caring captain of a submarine who does things by-the-book and has a strained relationship with Garner.

In the South Pacific, in 1942, Capt. Paul Stevenson (Edmond O’Brien), commander of the submarine USS Barracuda, orders his submarine to remain concealed as a convoy of Japanese ships passes over them. This results in a loss of valuable time for a young seaman severely injured in a prior torpedo room accident. The sailor dies in the Pearl Harbor hospital when the ship finally reaches port. The majority of the crew blames the anguished skipper for the death, believing he should have risked attacking one of the convoy’s stragglers to speed things up in their return to port.

Meanwhile, in San Diego, California, Lt. j.g. Kenneth M. Braden (James Garner) graduates with highest honors from the Navy’s Underwater Demolition School and while waiting for further orders dates the attractive Sally Johnson (Andra Martin). After a week of dating Sally, he proposes. But she doesn’t say yes, even though she also seems to have fallen in love. Braden then receives orders that he’s to be a passenger aboard the Barracuda and is to land in secret on a Japanese held island, Kusaie,and use his expert frogman skills to photograph a top-secret military codebook and leave undetected. Before departing for the ship in Pearl Harbor, Braden’s superior tells him that Sally is a WAVE assigned to Naval Intelligence and has been ordered to check his fitness for this special mission.

The gist of the war pic shows how dedicated everyone is in carrying out their duty despite the strained relationships and the mounting tensions aboard ship from the dangers in the Pacific due to enemy planes and an attack by a destroyer. In the last act, both Braden and Stevenson act with courage and conviction to successfully accomplish the mission, as the skipper backs off from his rigid stance and becomes more supportive of the vital mission and takes more risks with the safety of his boat. When back in Pearl Harbor, Sally is waiting for our boy.

Alan Hale, in a supporting role offering comic relief, has the role of a popular sailor who waited a long time for his promotion. Warren Oates, in his inauspicious film debut, has a tiny part and goes uncredited playing a sailor with a penchant for hanging around the mess hall because he likes to eat.

It’s all predictable stuff, but goes down as easy as apple pie. It’s a watchable submarine pic that should have been more exciting. 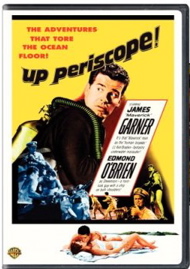 PASSION OF ANNA, THE