UP/ DOWN/ FRAGILE (HAUT/ BAS/ FRAGILE)

“The title comes from the markings found on packages delivered by the postal service.”

The title comes from the markings found on packages delivered by the postal service. The inspiration of the film comes from the Hollywood studio musicals of the ’50s. According to Rivette, he was most influenced by Stanley Donen’s musical Give a Girl a Break (1953). His other influences are the great French directors of the past, such as Renoir and Vigo. I rented Up Down Fragile along with Rivette’s first feature Paris Belongs To Us(1960), and it was interesting to see how Rivette kept some of the same themes: the need to be alone and also the need to be with a group, how one handles reality and fantasy, and the politics of being. It is his firm belief that the individual alone is responsible for his life’s direction, not anyone else. In his newer film which was stylistically and cinematically a much more sophisticated production than the former, we see these themes brought to fruition. He has become a director who is more assured of his abilities to work with actors on a more experimental basis, as the actors collaborate on the script.

The film follows the life of its three main characters: Ninon (Natashe), Louise (Marianne), and Ida (Laurence), as they try to work out their many problems in life. It occasionally breaks out in song and dance at the oddest moments, even when the film is moving along in a dramatic fashion. This lighthearted approach to the film annoyed me on my first viewing, but when I watched for a second time I felt more relaxed with its quirky style and was able to get in the mood Rivette probably intended for his film to be viewed; which is, that it is up to me to fill in the meaning of the story.

Its entertainment value was enhanced by the gorgeous use of colors both for the sets and outdoor location shots, which captured the summertime Paris streets and its parks.

We followed the moped messenger, ex-whore, Ninon, do her deliveries through the Parisian streets, and thereby got a rough idea about the Paris work scene.

We viewed Louise’s splendidly delicious living quarters; she is from an upper-class family; she has just been released from a clinic after being five years in a coma following an accident. She is followed for her own protection by a neophyte bodyguard, Lucien (Bruno), hired by her father without her knowledge. She will awkwardly meet and fall in love with him.

Ida is the adopted orphan, working as a librarian, looking for her real parents, wanting to find out why they put her up for adoption, and is still plagued by that childhood traumatic event.

Roland (Andre) is the set designer, the male thread that connects all three women heroines, the Gene Kelly look-alike. He meets Louise in her aunt’s house, the one she has just inherited; he falls in love with Ninon at the site of their respective workplaces, which happens to be on the same street where she works as a messenger and he designs stage sets; and, lastly, he meets Ida while doing research in the library after hearing her hum a tune that he recognizes, which turns out to be a song Sarah (Anna) uses in her nightclub act in a place he often frequents. Sarah is the real mother Ida has been looking for.

That this musical is better than most of the Hollywood musicals it flatteringly imitates, is true to a certain extent. It is better in the sense that Rivette is able to bring out the poetry of the real-life situations and present his existential view of life and not just play for the song and dance to be the thing. Though the Hollywood performers are more professional and have better voices and quicker feet is certainly true but they, also, seem to rely on an artificial story. While for Rivette the musical numbers are imbued with a magical fantasy quality, yet they are relevant to the story. That makes for a different way for American audiences to appreciate the musical, a genre that Hollywood at one time was the most innovative creators of; but, has now, all but abandoned because of high production costs and not enough box office gross to show for its efforts. 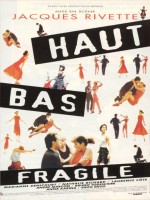 COUNT OF MONTE CRISTO, THE

ATTACK OF THE CRAB MONSTERS