“An exciting kidnapping story despite the routine plot.”

Rudolph Maté (“D.O.A”/”The Dark Past”) directs an exciting kidnapping story despite the routine plot. It underlines the brutality of both the police and the criminals, as each acts in a cynical way trapped by their career choices. For the criminal making a big score counts more than human life, while for the police life has become so cheapened that they will use questionable excessive methods to follow through on a criminal investigation.

When Joyce Willecombe (Nancy Olson) spots a man on the train heading into Chicago’s Union Station armed with a gun, she reports it to a disinterested conductor who only reports it to the police when she puts up a fuss. At the train station Joyce is met by Lt. William Calhoun (William Holden), who is the head of railroad security. He has the suspect and his partner followed after they put a suitcase in the station locker, but they lose the police outside the station. Soon the police learn that a blind millionaire heiress Lorna Murchison has been kidnapped and her father is told to wait for instructions to pay a ransom of $100,000. Joyce works as a secretary for her father and identifies the clothes in the station suitcase as hers. Since the railroad police fouled up, they call in the city police headed by Inspector Donnelly (Barry Fitzgerald) to spearhead the dragnet. When it’s learned the criminals will be using the station to make the money exchange, Lt. Calhoun sets a plan not to arouse any attention that the police are involved. They use Joyce to identify the two men and when one is spotted in the concourse, he’s followed on the elevated city train until he spots his tail and flees in the stockyard. A gunshot causes a cattle stampede that crushes him to death. It turns out there’s a third gang member named Vince, who is spotted by the alert Joyce in the street getting out of the car one of the kidnappers is getting into. She takes down the license plate number and reports the info to the bumbling police. Vince is apprehended in the station concourse and it’s learned that he’s a career small-time criminal. The police rough him up in a deserted area of the station in front of their bosses, and when he still doesn’t talk they threaten to throw him onto an oncoming train and makes his death seem like an accident. He spills everything he knows including where they are keeping the girl. The boss is a small-time but ruthless ex-con loser named Joe Beacom (Lyle Bettger), who departs the hideout with the bound victim and his moll Marge when Vince fails to show as planned. A patrolman spots their car in the street but is gunned down when he foolishly tries to take him without backup. In the crossfire, the mistress is critically wounded but is left in the street to die by her cold-hearted boyfriend who flees the scene. She is able to blab that the girl’s alive but Joe plans to kill her after he gets the ransom money. It all leads to the action-packed conclusion where the girl is kept in a dank and electrified tunnel while the ransom money is cleverly picked up by the kidnapper. But the perp is spotted in that dark maze, as Joe runs from a wounded Lt. Calhoun with the suitcase of money and in the shootout is killed before he can harm the girl.

The strong-arm police tactics move this thriller into film noir territory. Good performances by the stars allow the tense scenes filmed both on location and in the studio to be most compelling. Holden as the workaholic who questions if he has a place in his heart to find love, proves to be a dedicated cop who cares about the victim. Fitzgerald is a good counterpoint, as the crusty veteran who has become cynical but believes in his old age that prayers can also be of help alongside the nightstick. Olson is convincing as the innocent bystander who did a better job than the professionals in tracking down the criminals. 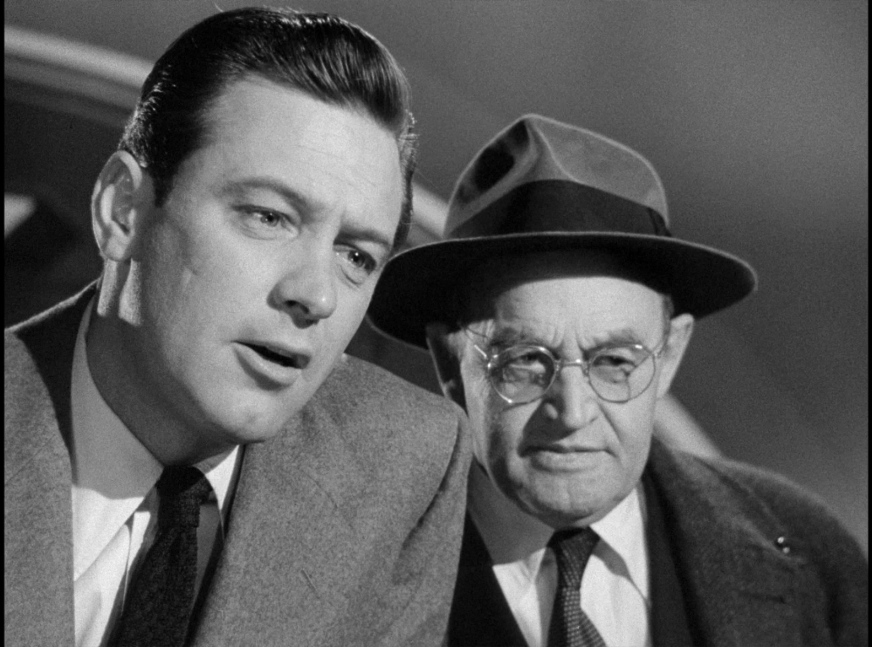