“Superior telling of a werewolf picture.”

Superior telling of a werewolf picture. Director John Brahm(“Broken Blossoms”/”The Lodger”/”Hangover Square”) gets it right, keeping the B film thoughtful, eerie and suspenseful. The gloomy atmosphere is well photographed by Lucien Ballard in chiaroscuro. It’s based on the novel by Jessie Douglas Kerruish and the play by Lillie Hayward. It’s tersely written with aplomb by Michael Jacoby.

It’s quickly learned that the locals believe there’s a family curse involving the wealthy established English family, the Hammonds, whereby a century ago the family patriarch made a pact with the devil and ever since every so often the male family descendents on frosty nights come under attack from supposedly a supernatural being believed to be a werewolf. A crypt in the mansion basement holds their corpses. The last time this attack occurred was when the grandfather of the siblings, who inherited the estate, died under suspicious circumstances some twenty years ago and it was called a suicide.

The film opens when Oliver Hammond (John Howard) is attacked at night after leaving the medical office of Dr. Colbert (Bramwell Fletcher), the local doctor and the suitor of his sister. Hearing screams enables the family groundskeeper (Alec Craig) and butler (Halliwell Hobbes), who seems to know a lot about the family secrets that he refuses to reveal, come to the rescue of the bloodied Oliver before he’s critically mauled. Also attacked was the nurse Kate (Virginia Traxler), who is left in a coma. Scotland Yard’s Inspector Craig (Aubrey Mather) assigns his ace chief lab man Robert Curtis (James Ellison) and his goofy fun-loving assistant Christy (Heather Thatcher) to investigate the strange attack, and they decide to live in the Hammond’s country estate while investigating. Oliver’s regal sister Helga (Heather Angel) doesn’t believe that there’s a curse on the family and welcomes the scientific investigation by the scientist policemen, even though it’s not welcomed by the family doctor or any of the servants. But as evidence piles up that only some kind of horrific beast could be responsible for the attacks, the lab people suspend their scientific beliefs enough to unlock shocking family secrets and in the end we all find out exactly what is the family curse.

The only thing that bothered me about this excellent production was the inane comedy relief performance by Heather Thatcher, which was out of place and unfunny. 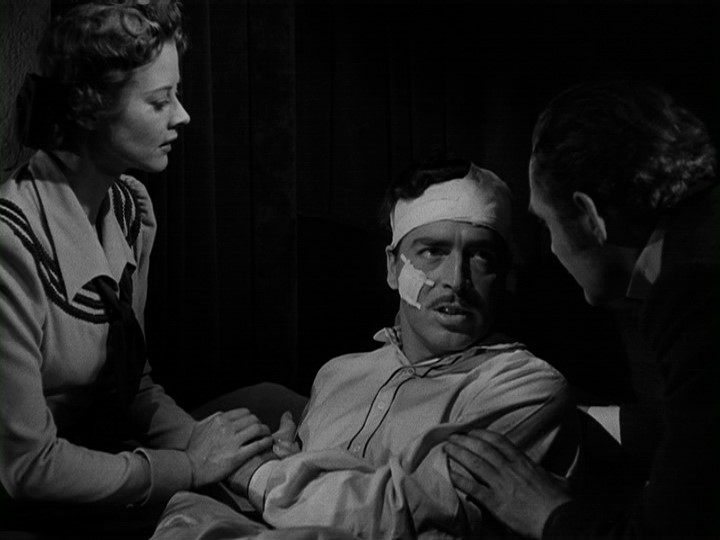