“Succeeds in capturing the novel’s sense of doom and gets a tour de force performance from Albert Finney.“

For purists, director John Huston’s (“The African Queen”/”Key Largo”/”Beat the Devil”) bleak film comes up way short when compared to Malcolm Lowry’s well-received subtle visionary but unfilmable 1947 novel. Though it succeeds in capturing the novel’s sense of doom and gets a tour de force performance from Albert Finney as the world-weary drunken Brit diplomat going down for the final count, it never approaches the novel’s deeper meaning of a man destroyed by his own imagining of the coming apocalypse (due to the rise of fascism and the approaching world war). Instead it shoots for the more pedestrian meaning of a man destroyed by his own frailties over being cuckolded, his unmanageable drinking problem and his interminable self-pity. It also fails to relate enough energy to the political, religious and mystical aspects of the novel that made it so appealing on an aesthetic level, though it certainly gives hints throughout of these key symbolic points.

The film opens on the eve of the lively festivities of the Day of the Dead, filled with skull-and-skeleton decorations in the streets, in the Mexican village of Cuernavaca in November 1938 and covers the 24-hour period in the life of the ex-British Consul Geoffrey Firmin (Albert Finney). The disgraced diplomat resigned his office as he’s wracked with guilt over his empty life, is distraught that his wife Yvonne (Jacqueline Bisset) has left him and is on an uncontrollable drinking binge. Upon returning home in a drunken stupor after a night on the town Geoffrey discovers that his wife unexpectedly has returned after an absence of a year and wishes to give the marriage another chance. Soon his journalist half-brother Hugh (Anthony Andrews), dressed as a cowboy, also appears after recently returning from fighting against Franco in the Spanish Civil War. The adventurous Hugh had an affair with Yvonne, which still bothers the betrayed brother.

Alcoholism was the central plot device in Mr. Lowry’s semi-autobiographical novel (he was a suicidal alcoholic), as it is in the film. But the film can never get at the inner workings as readily as the written word does of its dipso protagonist even though Guy Gallo’s screenplay barrels into that territory and Finney convincingly portrays his character as a tortured soul heading for an even greater free fall as he stumbles around the town trying to drink himself into oblivion. But the film is so ugly to watch that its rewards in watching such a creative self-destruction are minimized. The pathetic Geoffrey wanders aimlessly around the village for most of the pic and then in the climactic scene drunkenly makes his way to an out-of-the-way sleazy bar-whorehouse where he’s too drunk to see or care about the danger in front of him. The only saving grace for Geoffrey is that he holds onto his dignity even as he plunges full steam ahead into his hellish self-created destruction.

The film is enhanced by the brilliant photography by Mexican cinematographer Gabriel Figueroa. That it succeeds at all, albeit in a limited way, is probably a minor miracle due both to Finney’s staggering performance and to Huston smartly scaling down the story to follow only his three main principals (the part of the novel that is most filmable) and by his being faithful to the author’s vision no matter how much of the story was not told. 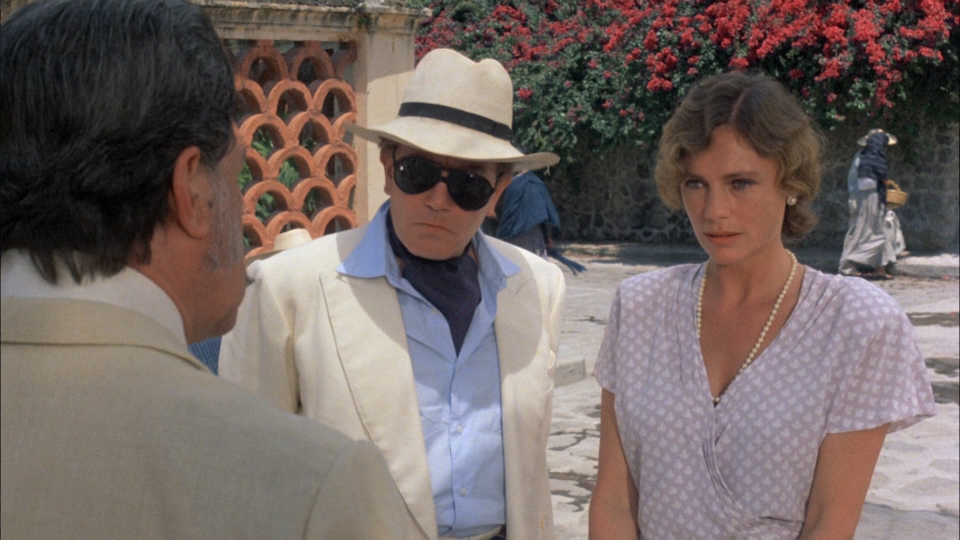