A cheesy low-rent supernatural thriller that vainly tries to introduce some gravitas by dropping references to the Kabbalah (Jewish mysticism), but this is mostly a special-effects film as star where the story and the actors are secondary players. It’s about a skinny 19-year-old upper-middle-class Chicago college coed and baby-sitter named Casey Beldon (Odette Yustman), who looks alright in her skivvies and gives off with some neat standard-issue horror flick screams. Her problem is that she’s haunted day and night by hallucinations and dreams of a “dybbuk” (an undead malevolent wandering soul of Jewish folklore not allowed entry into the afterlife and whose only mission is to gain reentry into the physical world by inhabiting human bodies) that possessed a young boy twin slaughtered in Auschwitz by the infamous Nazi butcher Dr. Mengele—known for his ruthless experiments on concentration camp twins.

Writer-director David S. Goyer (“Blade Trinity”/”The Invisible”), writer of the “Blade” series, receiving a screen credit for The Dark Knight and co-writer of Christopher Nolan’s “Batman” movies, is responsible for this Jewish “Exorcist” horror film mess, that patches together the usual creepy horror film visuals (slimy bugs-known as Jerusalem crickets-coming out of eggs and other strange places, children demonically possessed, the grotesque image of an elderly wheelchair-bound invalid twisting his head Linda Blair-style, dog ghosts with human masks as messengers from the underworld, a deformed living fetus in a jar, and mirrors that bring about dark mysteries) along with a lingering Holocaust tale that is revisited in modern times via flashbacks.

The highlight for me was a bored looking Gary Oldman as Rabbi Sendak performing an exorcism by blowing the shofar (the ram’s horn used during services at the Jewish High-Holy days) to rid the possessed of the demon. It’s hard to tell if the filmmaker was shooting for scares or campy fun, but since I didn’t find the film scary, credible, or interesting I at least found this scene comical, whether it was intentional or not, as it was the only thrill I got out of this silly fright pic.

Casey lives alone with her doting business executive dad (James Remar) in the Chicago suburbs, as her depressed mentally troubled mom committed suicide a few years ago. While jogging along a lonely park path, she has a bizarre encounter with a demon child. Later while babysitting, she encounters the 4-year-old neighbor boy Matty shining a mirror in his baby sister’s eyes while chanting “Jumby wants to be born” and hits Casey in the eye with the pocket mirror when she tries to stop him. This calls for a visit to the eye doctor (C.S. Lee), who informs her that she has different colored irises as a result of being a twin. Not knowing she was a twin, her dad now clues her in that in her mom’s womb she strangled with her umbilical cord her would-be brother—nicknamed Jumby.

With the help of her loyal boyfriend (Cam Gigandet) and best friend (Meagan Good), she tracks down her estranged grandmother Sofi Kozma (Jane Alexander), someone she never knew existed, in a dreary Windy City gothic nursing home, and learns she was a Holocaust survivor and her twin brother died in the camps and was possessed by a dybbuk who was to become the family’s curse in its future generations. Through granny, Casey learns all the facts about the dybbuk and makes plans with Rabbi Sendak to free herself of this possession. We are told constantly from early on that “Jumby wants to be born now,” as those that still cared at this point about this supernatural happening might puzzle over what happens next after learning that our heroine is pregnant with twins. I just puzzled over how such dreck took in over $19 million dollars over the weekend. 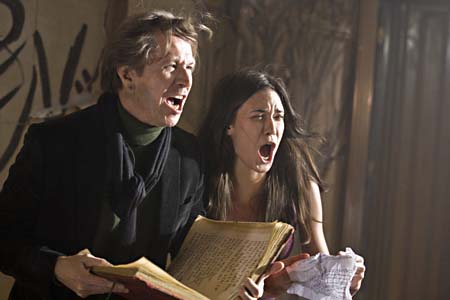