“A humanistic story about how tragedy has different effects on people.”

A humanistic story about how tragedy has different effects on people, about how a good teacher functions in a classroom and how an immigrant from Algeria relates to the French speaking people from Quebec and vice versa. Canadian writer-director Philippe Falardeau(“Congorama”/”It’s Not Me, I Swear!“)bases the gripping topical French-Canadian drama on the one-person stage play by Evelyne de la Chenelière.

It opens during the winter season in a Montreal elementary school, where the 11-year-old Simon (Émilien Néron) while on morning milk-monitor duty shockingly discovers his popular young teacher, Mrs. Martine Lachance, has hanged herself from a pipe in the classroom. Before the children are cleared out of the building, Simon’s best friend in school, Alice (Sophie Nélisse), takes a peek at the suicide victim. While the class gets a psychologist to help them get over the shock, Monsieur Bachir Lazhar (Mohamed Fellag, Algerian theater director and actor–lives in in Paris since 1995), a recent immigrant from Algeria, a week later applies to the stressed-out principal Mrs. Vaillancourt (Danielle Proulx) for the job of replacement teacher and to get the job lies about his teaching experience. Lazhar claims to have taught grade school in Algiers for 19 years when in actuality he was a civil servant who later owned a restaurant. It was his wife who taught in college and who was an author of a political book against the Algerian regime. The dignified and unassuming Lazhar proves to be a sensitive teacher, one of the best in the school, who does things differently from the previous teacher but wins over the class as they go through the healing period because he relates to their unstated trauma.

What works especially well are the series of classroom scenes that capture school life, from yard play to Lazhar using the difficult author Balzac for classroom diction lessons. Eventually we learn a little more why the teacher chose suicide, why Simon feels guilty over his teacher’s death and what painful events happened to Lazhar in Algeria that made him seek political asylum in Canada.

It’s a gentle and observant moralistic tale that doesn’t seek answers, but movingly tries to show there’s a common ground to all who experience tragedy even if they come from worlds that are much different.

The film was nominated for an Oscar for best foreign language film and won six Genies (Canadian Oscars) for best picture, director, adapted screenplay and actor. 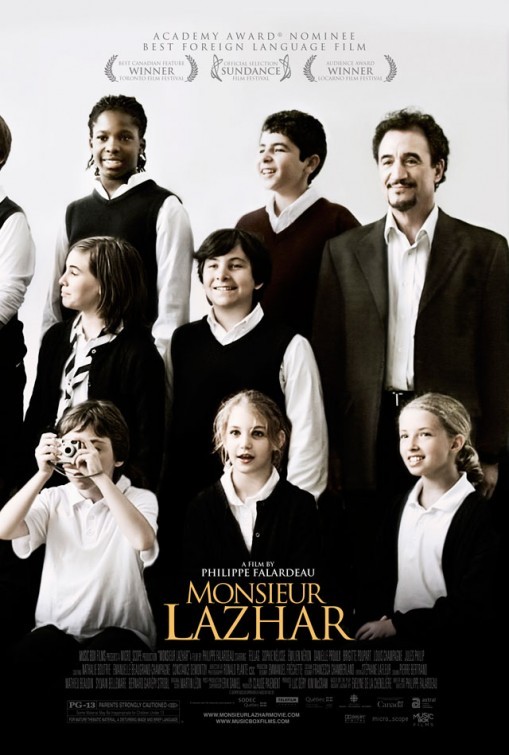