“Too talky, conventional, vague and ponderous.”

Better known as a TV director, George Englund (“Signpost to Murder”), does only a fair job as he helms this uneven muted political drama, that never quite spells out the hard lessons the best-selling book it was based on said about U.S. foreign policy in Asia; it’s loosely based on the novel by Eugene Burdick and William J. Lederer, and is written by Stewart Stern.

It’s set in 1960 in the mythical southeast Asian nation of Sarkhan (most resembles Vietnam), a monarchy with an unstable democracy that’s supported by American aid and arms against Communist advances from the north. Ex-journalist Harrison Carter MacWhite (Marlon Brando) is appointed the new ambassador to the strife-torn country. His arrival causes a bloody anti-American riot at the airport, which has him chew out his staff for being uninformed. MacWhite’s old rice farmer friend from WWII days, Deong (Eiji Okada, Japanese star of Hiroshima, Mon Amour), is now a high-profile political activist who wants the Yankees to go home, and is suspected by many in Washington of being a Communist. Deong’s opposition does not suit MacWhite who endorses his country’s plan to build a ‘Freedom Road’ to the country’s Northern border, which is an important road into the country’s inaccessible interior. The American enemies, which are made up of many different groups, claim it will extend the American influence in the country, and will be used only to support a military effort against the commies in the north.

Their reunion sours over this disagreement, as Deong sides with those who want to see the American-supported regime in the south topple. Kukrit Pramoj plays the calculating Prime Minister in the south. Mr. Pramoj, who doubled as adviser on this project, served as a former Minister of Finance in Thailand and later went on to become Thailand’s real-life premier.

In its liberal message, which is often muddled and diluted, the film offers its take on the ambiguities and problems over cold war politics. It’s well acted, especially by a likable Brando as the ‘ugly American’ who is blinded by his arrogance and gullibility; but it’s still too talky, conventional, vague and ponderous to be more than a modest drama. 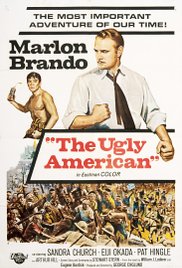