Another awful Bob Hope comedy.It goes down as sour as a lemon drop. Bob Hope plays a racetrack tout, whose fast-talking con-man shtick is used for laughs. but the laughs do not come easy and the low-brow comedy becomes increasingly more and more tiresome as Hope stays in character. It’s based on the passe Damon Runyon short story, which is completely ruined by the misplaced stream of lame Hope wisecracks that keep it from being the sentimental tale it was meant to be. This square take on colorful Broadway characters was filmed before in 1934, starring Lee Tracy and Helen Mack, and was almost just as bad. Sidney Lanfield (“King of Burlesque”/”One in a Million”/”My Favorite Blonde”)directs as if his mind was frozen until the third act when he thawed out to remember his main character was supposed to be not only a wise guy but a sympathetic figure, and ends the pic with an unconvincing rushed sentimental phony baloney ending.The main problem being not the slight narrative, but that the pic was just not funny.

There are Bob Hope fans still alive, and for them this might work as one of his better comedies before his later unmitigated embarrassments. Anyway, it’s Hope in full persona. And what’s positive is the pic introduced the appealing Christmas song, now a holiday classic, “Silver Bells,” with Hope and Marilyn Maxwell cheerfully singing a duet.

The Lemon Drop Kid (Bob Hope), dubbed that name because of his candy habit, is working a Florida racetrack to tout false tips to betters and makes the big mistake of giving the girlfriend of mobster Moose Moran (Fred Clark) a ‘sure thing’ on a fixed race and when she bets on his tip and Moose’s original choice wins, the Kid is confronted by the gangster and told to cough up the $10,000 he would have won or else Sam the Surgeon (Harry Bellaver) will carve him up. The Kid talks Moose into giving him a few weeks in NYC, and vows to come up with a scheme to pay it all back by Christmas Eve.

In blustery NYC the Kid recruits some Broadway characters to play street corner Santas collecting donations for a bogus old ladies home on Long Island, a former gambling casino owned by Moose and closed down by the authorities. Rival mobster Oxford Charlie (Lloyd Nolan) muscles in on the donation racket, while the Kid’s soft-hearted club singer girlfriend Brainey Baxter (Marilyn Maxwell) tries to steer her boyfriend into the Christmas spirit and really give the donations to charity and settle down to married life.

The burlesque slapstick routines has Hope dressing as Santa Claus and in drag as an elderly woman, and firing off a volley of one-liners. If you like Hope’s coward act and one-liners, you’ll like this pic. I, obviously, didn’t. 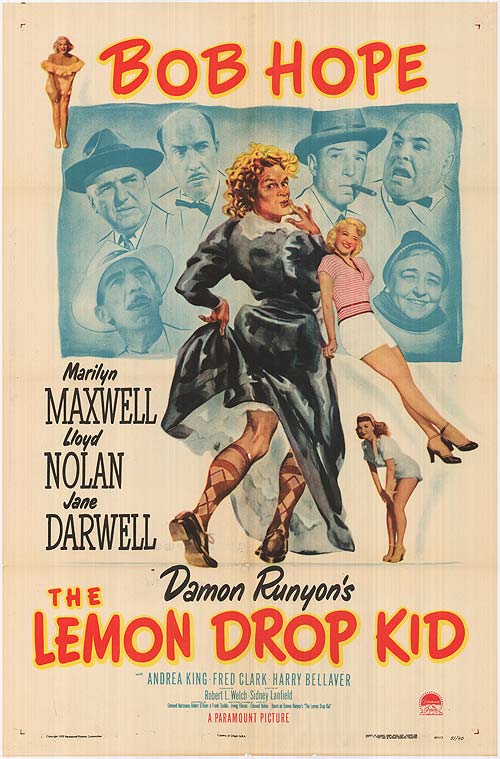 NIGHT AT THE MUSEUM: BATTLE OF THE SMITHSONIAN

LET THEM ALL TALK