“A far cry in insight from Hollywood’s idealized romantic dramas.”

The 39-year-old director James Gray (“We Own the Night”/”The Yards”/”Little Odessa”) successfully switches gears from his previous borough gangster movies to a poignant and quirky romantic drama set in Brooklyn’s Brighton Beach. Gray works from a powerhouse script by Ric Menello, and delivers a downbeat mood piece that looks more like a European art film than an American one.

The opening scene has the depressed 30-year-old Leonard Kraditor (Joaquin Phoenix, who announced after the film that his new career will be as a hip-hop singer) jumping into the wintry waters of Sheepshead Bay in a half-hearted suicide attempt, but is saved by a Good Samaritan and just walks away dripping wet claiming he accidentally fell in. Leonard’s a withdrawn and polite aspiring photographer (specializing in black and white snapshots of desolate storefronts), a bipolar sad sack on meds who was released four months ago from a mental hospital when he broke down over a broken engagement with his fiancée and has now returned to live with his traditional-minded Jewish parents, Reuben (Moni Moshonov) and his nurturing mother Ruth (Isabella Rossellini), in their comfortable and roomy Brighton Beach apartment. He also works in his father’s neighborhood dry-cleaner.

Dad is ready to retire and sell out his good location store to the aggressive Michael Cohen (Bob Ari), who owns a chain of dry cleaners and is prepared to take Leonard into the business as part of the deal. Michael’s attractive JAP daughter, Sandra (Vinessa Shaw), a sweet young woman, is attracted to Leonard, and both families are anxious to have a match so they push them together. But Leonard is seemingly more attracted to fellow fuck-up Michelle Rausch (Gwyneth Paltrow), a volatile shiksa who is a kept woman by her married high-powered Manhattan lawyer boss, Ronnie Blatt (Elias Koteas), who pays for her fancy apartment in Leonard’s building and fills her head with promises of one day leaving his wife. The conflicted Leonard thinks he loves his free-wheeling kindred spirit shiksa more than he does Sandra, as the party girl beauty with the ecstasy habit offers wild times and he believes she can give his life the charge he no longer feels. Yet Leonard can’t complain about ordinary girl Sandra, someone from the same background, who has sex with him after she tells him her favorite movie is the corny The Sound of Music. The stable Sandra is more available and less complicated and probably more likely to make a safer mate. The question becomes can the fucked-up Leonard find his own identity and will he choose the wild blonde shiksa over the more suitable parental approved Jewish traditional woman, or will he blow both relationships.

The troubled young man struggles to make the right choice, and in the end that choice is made for him. Though it’s hard to fathom what either appealing women sees in such a nebbish, the romantic conceit still makes sense as it plays out with the women opposites either prepared to be a nurturing lover or arousing in Leonard his nurturing love. Refusing to go for comedy and playing it serious, Gray seems to be inspired by Dostoyevsky’s ‘White Nights.’

Gray’s revealing, honest and soft look at romance (family, romantic and sexual) in the outer borough shows that love is something imperfect that just happens because people are needy and need to feel wanted, which is hardly romantically appealing but it’s a far cry in insight from Hollywood’s idealized romantic dramas. 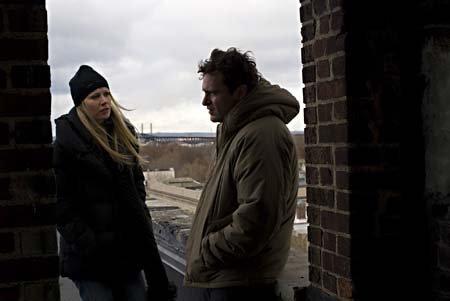 LONG HAIR OF DEATH, THE