Legendary cult director Monte Hellman (“Cockfighter”/”The Shooting”/”Ride in the Whirlwind”) hits paydirt going in search of the ultimate drag race, but finding instead the ultimate existential road movie. It’s aided by the fine script of Rudolph Wurlitzer and Will Corry as well as the magical performance by Warren Oates. Esquire magazine ran a cover story on the film and reprinted Wurlitzer’s screenplay, and even proclaimed it “the movie of the year.” But that dubious prediction didn’t pan out; the movie-going public just didn’t take to this psychological “arthouse” drama. Nevertheless the disturbingly subversive film has stood the test of time and seems to have even gotten better with age.

The aimless Driver (James Taylor, legendary folk-rock singer) and the expert Mechanic (Dennis Wilson, drummer for the Beachboys) are on a cross-country trek from the west coast and on the way in their souped-up ’55 Chevy hustle drag races on the blacktop. They’ll pick up a talkative hippie hitchhiker known only as the Girl (Laurie Bird), and the men will each ball her before she splits out of boredom (boredom is pictured as the disease of youth and those who have aged but not yet matured). The film revs up at full speed when the drag racers meet the middle-aged boastful owner of a ’70 Pontiac G.T.O (Warren Oates), who challenges them in the southwest to a cross-country race to the east coast with car ownership at stake.

The laconic Taylor and Wilson, fixed in their hermetic world, blend in with the inert landscape of filling stations, roadside diners and blacktop highways. After setting up the plot line Hellman’s film amazingly loses its passion for the big race, any allegorical motives or making any generational statements, as it concludes as the film burns up leaving a white screen. But by taking on the hot-rodders and their obsession and self-destructive natures, Hellman makes an effort to understand a little more about human nature and makes this not your usual shallow car race flick.

It’s fresh, strange, eerie and brilliant, as it explores with deep feeling these hot-rodders heading to nowhere in particular. There’s more to this film than first meets the eye. 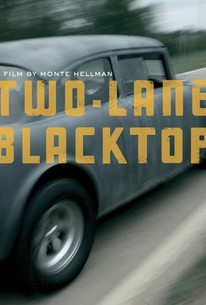