“Tomahawk is an action western set during the Great Sioux Uprising of 1866.”

Tomahawk is an action western set during the Great Sioux Uprising of 1866. It was filmed at the Black Hills, South Dakota. A follow-up pic to Broken Arrow (1950), with the hope of following that western’s theme that the Indians would be treated as humans and not savages. George Sherman (“South of the Border”/”Pals of the Saddle”/”The Sleeping City”) competently directs. Writers Silvia Richards and Maurice Geraghty base it on the historical story by Daniel Jarrett.

The Sioux and the Cavalry pow-wow over a past treaty that the Army wants to break because gold is discovered on the Indian land. The U.S. Army wants to build a road and fort on the Sioux territory. Chief Red Cloud (John War Eagle) angrily ends the meeting with Col Carrington (Preston Foster), the leader of Fort Kearny, with the promise that he will not go to war unless the Sioux are attacked first. The eventual uprising in Wyoming is also traced to crooked traders, sly politicians and racist Cavalry officers– like Lt. Rob Dancy (Alex Nicol). When Dancy kills the chief’s favorite kid relative,, the war is on.

Van Heflin plays the legendary peace-loving scout Jim Bridger, widowed to an Indian, who tries to broker a peace so the Sioux will keep their territory rights. But he fails to prevent the war. Bridger’s actress lover is played by Yvonne de Carlo. Susan Cabot plays the Cherokee maiden who Bridger is a guardian to.

In the end, when war breaks out, the Indians appear as savages (so much for Hollywood’s attitude changes). Also, the liberal scout hero turns out to be less interested in race relations than in how the new “breechloading”rifles work. 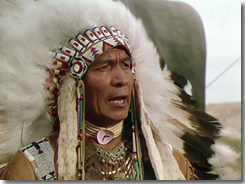 MAN FROM LONDON, THE