TO KILL A MOCKINGBIRD

Robert Mulligan (“The Nickel Ride”/”Fear Strikes Out”) poignantly directs this solid social conscience drama shot in black and white. Horten Foote adapts the intelligent sentimental civil rights screenplay from the Pulitize Prize-winning semi-autobiographical debut novel of 1960 by Harper Lee. Truman Capote happened to be Lee’s next door neighbor. Southern bigotry is told through the eyes of two innocent playful white children of a sincere lawyer. Gregory Peck deservedly won an Oscar for playing the decent country lawyer who defends a framed black man (Brock Peters) of rape charges against a young white lady Mayella Ewell (Collin Willcox), and tries to shield his children from the town’s hatred he receives for defending the Negro. In 1932, Atticus Finch (Gregory Peck) is a widowed lawyer in the small-town of Maycomb, Alabama, who is raising without bigotry two school children — the six-year-old tomboy daughter Scout (Mary Badham) & the 10-year-old Jem (Phillip Alford). His quiet life is altered when Judge Taylor (Paul Fix) asks him to take the controversial rape case. The film excels painting a nostalgic look at the sleepy town segregated south, and of imaginative children playing freely in the streets. Peck’s kids are affected by the trial and are curious about the creaky wooden house in the neighborhood where Boo Radley (Robert Duvall, his film debut) lives. According to neighborhood lore, the never seen by the children crazy Boo is chained to his bed by his father and never goes outside. The critically-acclaimed beloved film has passed the test of time to be a classic, and stands out as one of Hollywood’s better race relation films. 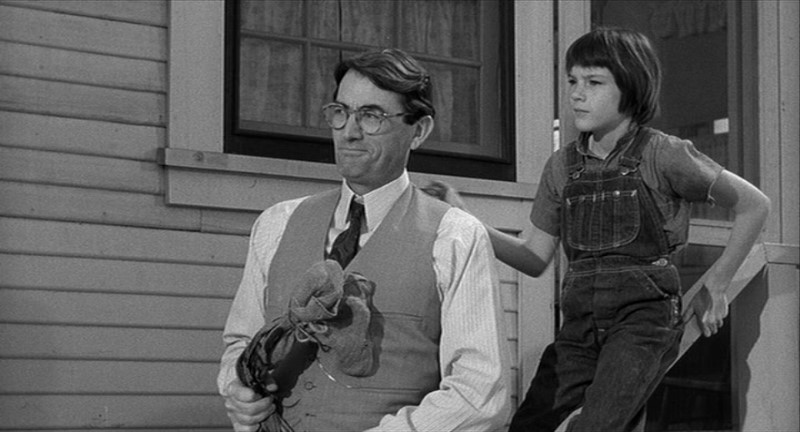