TILL THE END OF TIME

Till The End of Time came out before Samuel Goldwyn’s Oscar winning The Best Years of Our Lives, which is a superior film it’s often compared to that’s directed by William Wyler and covered the similar theme of the plight of returning veterans. It’s a tepid post-war romantic drama based on Niven Busch’s novel They Dream of Home, about three returning WW II marines–best wartime friends Cliff Harper (Guy Madison) and Bill Tabeshaw (Robert Mitchum), and someone named Perry Kincheloe (Bill Williams) they befriend in the hospital upon returning home. Tabeshaw has a metal plate in his head and has trouble saving up enough money to buy a New Mexico ranch. Perry has lost both legs and wallows in self-pity. Harper falls in love with distraught war widow Pat Ruscomb (Dorothy McGuire), and has trouble adjusting to civilian life in San Diego. This frustrates his suburbanite nagging mom (Ruth Nelson) and regular guy dad (Tom Tully). Unable to make Pat forget her officer hubby, shot down on a combat mission, Harper flirts with his spunky college sophomore neighbor Helen Ingersoll (Jean Porter). The three ex-marines meet in a bar to discuss a possible partnership in a ranch and when confronted by a bigoted war veterans group, who don’t allow Catholics, Jews, or Negroes, they get into a barroom brawl which brings them together. The bleak film ends on an optimistic note, with the three marines now more prepared for civilian life and more realistic about themselves. It’s interesting to note that the harmless barroom brawl scene was used a few years later during the House un-American Activities Committee hearings to chastise producer Dore Schary, screenwriter Allen Rivkin and director Edward Dmytryk (“The Carpetbaggers”/”The Caine Mutiny”) for being Commie sympathizers.

The title comes from a popular, end of the war, theme song derived from Chopin’s “Polonaise.” The film’s star is the handsome Guy Madison in his debut. He was a young telephone lineman from Bakersfield, California, who was spotted by a talent agent while on leave from the navy. His problem was that he couldn’t act. On a happy note, Dmytryk was to marry the girl who got spurned in the pic by Madison, Jean Porter, whom he didn’t know before Schary recruited her from MGM. 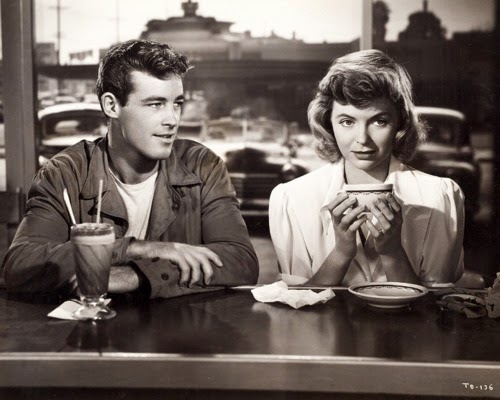