MAN WHO SKIED DOWN EVEREST, THE

“An intriguing adventure documentary about an incredible but unnecessary feat attempted.”

An intriguing adventure documentary about an incredible but unnecessary feat attempted. It won an Oscar in 1975 for Best Documentary. The film follows the 1970 Japanese skiing expedition that featured world champion skier Yuichiro Miura, a 37-year-old, and his team of adventurers as they seek out Mount Everest, the highest mountain in the world, and attempt to climb it and have the obsessive fitness nut Miura ski down its summit (starting just below 27,000 feet). The narration delivered in English by Douglas Rain is taken from excerpts in Miura’s diary.

Miura’s team includes a camera crew and arrives in March in Katmandu, Nepal, and treks on foot for 62 days with the local porters carrying their heavy equipment to the foothills with the Sherpas (the mountain people used as guides) taking over to help them reach a base camp on Mount Everest at some 18,000 feet. Tragedy befalls them when a cave-in causes six Sherpas to die. The expedition continues despite the natural hardships caused by lack of oxygen in the high altitude, frigid conditions, steep climbs, glaciers and moving massive blocks of ice.

It’s all about what Sir Edward Hillary, the first to climb in 1953 Mount Everest, said in a conversation with Miura: “Challenge is what makes men.” Some may say it’s all about the arrogance of man, who thinks he can overcome nature. But, on the other hand, it’s this kind of arrogance that helped man advance technically and introduce new concepts into the world to make his life more comfortable.

It concludes with the voiceover echoing Miura’s thoughts at what he accomplished after skiing down Everest with a parachute and an oxygen mask: “I skied 6600 feet in 2 minutes and 20 seconds. I fell 1320 feet. I stopped 250 feet from the crevasse. Numbers have meaning in the world below. But in this almost airless world, what do they mean? Was it a success or a failure? That I am alive must be the will of some higher power.”

I found myself curiously drawn to the foolhardy idea of an expedition that cost three million dollars and also the lives of six intrepid Sherpas, and I’m still scratching my head if it was worth it even as I reflect on the stunningly beautiful mountain photography and that there was an honest attempt to be philosophical and analytical about the unique experience (a mixture of extreme sports thrills and spiritual character development). 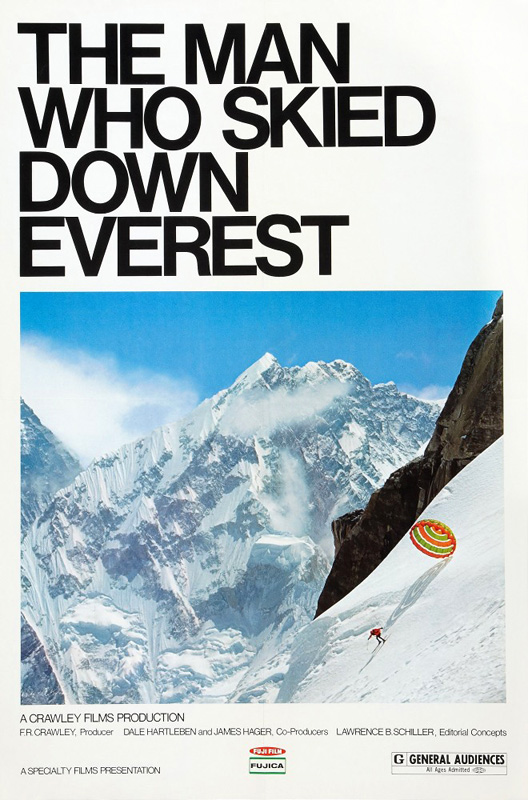