THAT NIGHT’S WIFE (SONO YO NO TSUMA)

The 16th film of Yasujiro Ozu(“An Inn in Tokyo”/”The Only Son”/”Late Autumn”), of which 9 are lost, is a stylistic, earnestly tenderhearted and passionate police/crime drama based on the story Nine to Nine in New Youth magazine by Oscar Schisgall, that was published on April 9, 1927 in America and in Japan in the March 1930 edition of the magazine. Kogo Nada wrote the screenplay, changing some of the story to keep it linear, a narrative style preferred by the director (never one to use flashbacks). It was the only film that Ozu set almost entirely at night, and one of the two that involved guns (the only other being his third and last gangster film entitled Dragnet Girl-1933). The film was released to theaters on July 1930, and its story immensely pleased the studio boss at Shôchiku.

Unemployed commercial artist Shuji Hashizume (Tokihiko Okada) robs at gunpoint an office at night to get money needed to get medical help for his critically sick little daughter Michiko (Mitsuko Ichimura). Dr. Suda (Tatsuo Saitô) tells the worried mom, Mayumi (Emiko Yagumo), if her daughter can get through the night she will recover. Coming home from the robbery, Shuji hails a cab, whose driver he doesn’t realize is detective Kagawa (Togo Yamamoto). The detective enters the apartment and reveals his true identity. When the wife refuses to tell where hubby is hiding in the disorderly one-large room, the detective pulls a gun as he searches. The wife then uses hubby’s revolver to take the detective captive and point the two guns at him. The husband reveals himself and promises to give himself up if his daughter makes it through the night. In the morning the doctor returns and says the girl will recover, but still needs to be cared for. The detective is moved by the couple’s plight and pretends to fall asleep, giving Shuji a chance to escape. But after fleeing Shuji returns and is escorted to the police station arm in arm with the detective.

Ozu mixes a crime drama with a family melodrama, and it’s the only time in his long film career that his picture turns totally on a crime committed. To pay his respect to American films that influenced him, Ozu has movie posters for Broadway Babies (1929) and Gentleman of the Press (1929) on the walls of the commercial artist’s apartment. Ozu during Shuji’s flight from the crime scene, where he tied up the workers and nightwatchman, crosscuts to the anxious mom caring for her ailing bedridden daughter. Such a shot was a rarity for the great director. 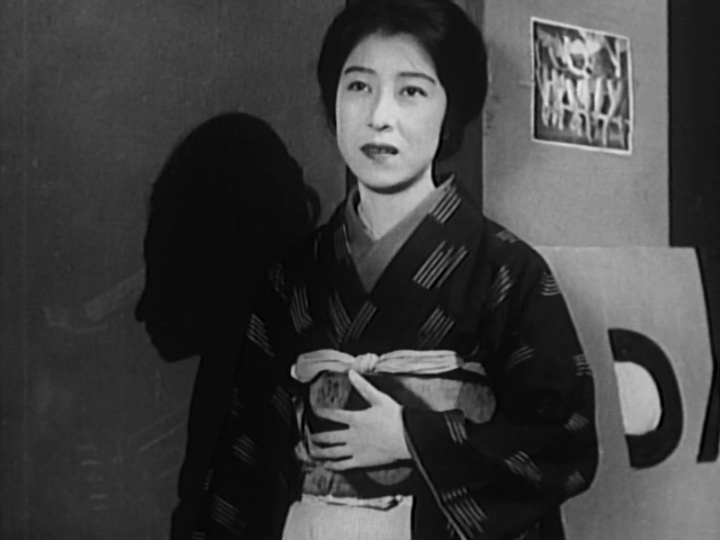