James Hogan (“Ellery Queen and the Murder Ring”/”Bulldog Drummond’s Bride”/”No Place for a Lady”) directs this period piece Reconstruction Western in the post-Civil War that has a strong pro-Southern viewpoint. It’s a clumsy remake of the silent from 1924, North of ’36. It’s based on the book by Emerson Hough and written by William Wister Haines, Bertram Millhauser and Paul Sloane. Its narrative is built around the problems of the opening of the Chisholm Trail, the arrival of the transcontinental railroad, and the formation of the Ku Klux Klan.

It’s set in Indianola, Texas, in 1865. Pretty ranch owner Ivy Preston (Joan Bennett), a Southern sympathizer, smuggles rifles in a covered wagon that just arrived by boat from Baton Rouge. She hopes to keep the Confederate cause alive by running guns to her lover, an unrepentant ex-Confederate captain named Alan Sanford (Robert Cummings), who wishes to ally himself with the Mexican emperor Maximilian. Ex-Confederate soldier Kirk Jordan (Randolph Scott) helps Ivy get around the Union soldiers blockade but refuses to join her cause. Though the South is overrun by corrupt carpetbaggers who have an abusive taxation system and are land-grabbers, Kirk seeks peaceful co-existence and hopes to earn big money by driving Ivy’s 10,000 herd of cattle to Abilene. Ivy first resists then changes her mind and with Alan joins Kirk on the cattle drive when Isaiah Middlebrack (Robert H. Barrat), the corrupt local administrator for the occupying Northerners, puts in place a head-tax on cattle. By the time they reach Abilene, Ivy comes around to agreeing with Kirk that a united country is the best way to go, while Alan remains unrepentant and seeks to join the Ku Klux Klan to drive the Yankees out of the South. Ivy still cares for Alan, but must choose which of these men she really loves.

There’s plenty of manufactured action (stampedes, dust storms and blizzards) on the arduous cattle drive to market across Indian territory, a tepid romantic triangle involving Kirk, Alan and Ivy, and Indian raids (along with a cavalry rescue). But it’s hard to take this Western for real since the direction is inept, the casting of the urbane Joan Bennett in a Western is a big mistake and the screenplay is absurd. Walter Brennan is his usual folksy self as the colorful foreman on Bennett’s ranch and trail drive cook, while May Robson is suitable as Bennett’s practical grandma, and Raymond Hatton is fine in the traditional Western role as Scott’s loyal sidekick. Scott, of course, is in his element and carries the film on his shoulders. 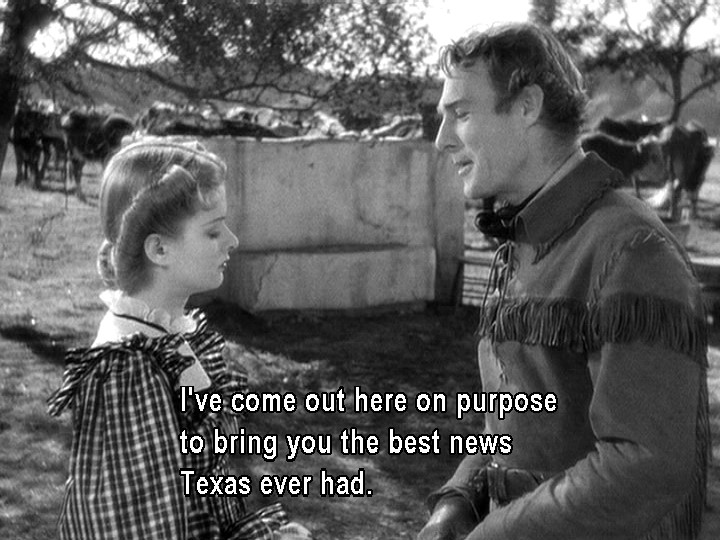