BUFFALO BILL AND THE INDIANS OR SITTING BULL’S HISTORY LESSON

Writer-director Robert Altman (“Nashville”/”The Long Goodbye”/”Gosford Park”) in this schematic but subversive film based on the play by Arthur L. Kopit that Altman adapted to the screen with Alan Rudolph, shoots for both laughs and a political history lesson that tells the truth about American myth-making. Altman targets the sophisticated crowd, as he relentlessly debunks the legendary American folk hero William F. Cody, nicknamed Buffalo Bill (Paul Newman), as a blowhard, a megalomaniac, a womanizer, an alcoholic, a bullshit artist, a fraud and a hollow showman who was invented by eastern dime-novelist Ned Buntline (Burt Lancaster) and turned his character by 1885 into a major successful story on showmanship. The white whiskered and fancy cowboy dressing Buffalo Bill is the colorful, patriotic star of the travelling Wild West Show that’s produced and emceed by the oily Nate Salisbury (Joel Grey), who leads his audience on to believe the main attraction was a genuine Indian fighter and a brave man who helped make this country great. Altman predictably shows that greedy entrepreneurs falsified history for their own benefit and that the Indians got a raw deal.

It was filmed on location at Stoney Indian Reserve in Alberta, Canada.

To even gain greater crowds, Buffalo Bill signs out of the Standing Rock prison the diminutive Sioux Chief, Sitting Bull (Frank Kaquitts), for a featured role in the show and plans to reenact the Battle of Little Big Horn from the white man’s prospective. William Halsey (Will Sampson) is the hulking giant who acts as the chief’s spokesman, since he speaks no English. Always the entertainer, Buffalo Bill’s formula for success is that “I give ’em what they expect.” But difficulty arises when Sitting Bull refuses to do the reenactment of the famous historic event because they are a misrepresentation of the truth, and suggests a reenactment of the cavalry slaughtering unarmed Indian women and children in a peaceful village.

Harvey Keitel plays Ed, Buffalo Bill’s naive hero-worshiping handyman nephew; Geraldine Chaplin is sharpshooter Annie Oakley, the one white person in the show with some sensitivity to the Indians; Kevin McCarthy plays the publicist Maj. John M. Burke; Pat McCormick plays the obese President Cleveland, who attends the show with his trendy new bride (Shelley Duvall), just as Sitting Bull saw in his dreams, but the politically wily president refuses to listen to Sitting Bull’s request for help for his people.

The revisionist history lesson from Altman did not go over well with audiences, who stayed away in droves and chose instead to celebrate in 1976 the bicentennial celebration somewhere else.

Not all of it comes off well, as it drags its feet through some parts that are just too predictable in its observations of Indian and white relations. But it has enough zap to overcome such dry spots. Also, Newman’s inspired performance is top-notch. 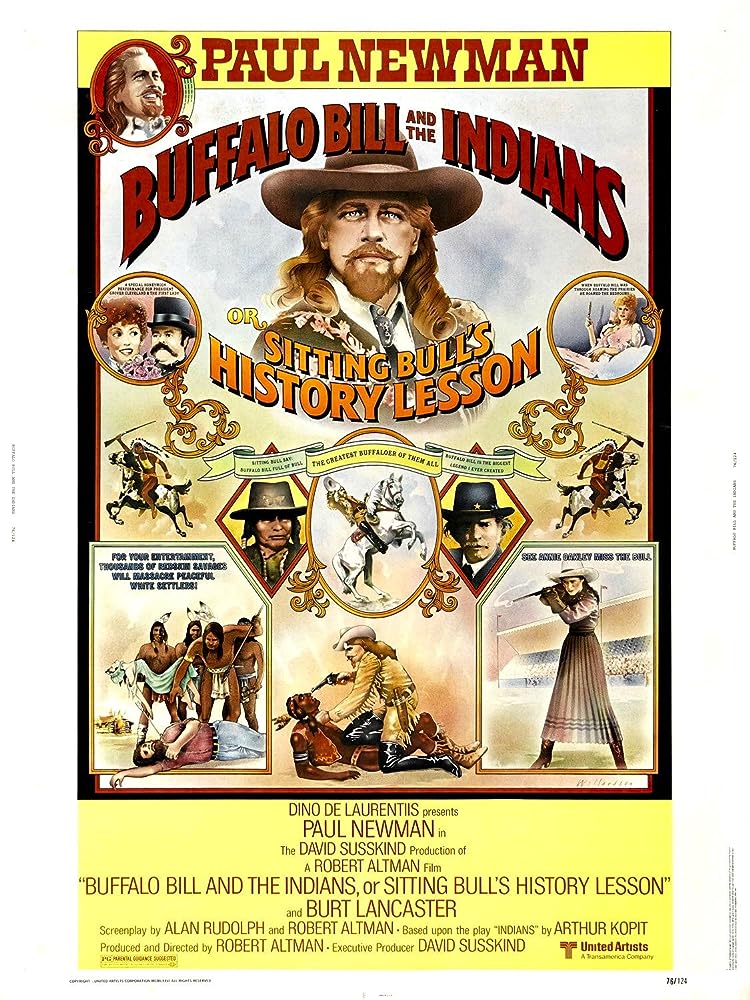