An excellent western based on the short story “The Double-Dyed Deceiver” by O. Henry and ably written by Dan Nathan Rubin. It has an action-packed melodramatic ending, with a surprise thrown into the third act. The fun Western deals with a moral dilemma and a catchy romance. Director John Cromwell (“The Prisoner of Zenda”/”Spitfire”) keeps it atmospheric, whether in S.A. or Texas. It was remade in 1939 as The Llano Kid with Tito Guizar, but without Gary Cooper starring it was much the lesser film.

The 25-year-old Llano Kid (Gary Cooper) is a wanted outlaw for a string of  hold-ups. When his horse throws a shoe while on the run, he gets the blacksmith, a Bible-quoting sheriff, John Brown (James Marcus), to fix it and in turn gets a lecture on the mysterious ways of the Lord. While waiting for the shoe repair, the Kid gets into a saloon poker game with someone he catches cheating and is forced to kill him in self-defense. The Kid is chased by a mob and sneaks on a train, whereby he steals the ticket to Galveston of a crooked lawyer named Thatcher (Oscar Apfel). The two patch things up, as the lawyer tells the cocky young bandit that he wants to partner with him on a scheme that will make both rich. He wants the Spanish speaking Kid to impersonate the son of the aristocrat, wealthy, widower, Señora Ibarra (Emma Dunn), who resides on a vast cattle ranch in South America. Thacker is her agent, and will tutor the Kid on her son. The Señora’s kid Enrique at ten ran away to the States from home fifteen years ago and has not been seen since. His mama misses him dearly, and saved a lot of gold for his return. The lawyer wants to steal all the gold and for the kid to sell her horses.

The pair take a boat to Señora Ibarra, and the lawyer leaves him there for two months. That’s when the boat returns and the scheme will go into play. But during that period the outlaw likes it there and grows fond of the old lady. He also falls in love with Señora Ibarra’s lovely niece Consuelo (Fay Wray). When the lawyer returns, the bandit tells him he’s changed his mind and that leads to a bloody confrontation that night over the gold. 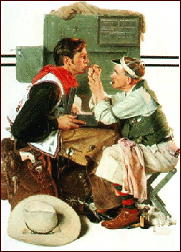