“Whether or not the troubled Mike deserves our sympathy is left up to the viewer.”

James Toback (“Fingers”/”Harvard Man”/”The Big Bang”) directs this personal in your face doc on the screwed up Mike Tyson, the criminal ghetto kid from Brownsville, Brooklyn, who became the heavyweight champ of the world and then had a meltdown. Archive footage is used but mostly Mike tells his story in his own words, as he takes us through his life: from being bullied as a child, living in a dysfunctional family without a father, becoming involved with thugs, going to reform school, being taught the art of boxing from ex-boxer Irish Bob Stewart, and through Stewart introduced to the legendary trainer Cus D’Amato. Cus becomes his guardian, mentor and friend, and has him living in his Catskill home. Under Cus’s influence Mike mastered the art of boxing and changed his anti-social behavior. But Cus died when Iron Mike was 19, and never saw him become the champ a few years later when he defeated Trevor Berbick for the heavyweight crown.

A reflective Mike, still devastated by the loss of Cus, rattles on about his checkered life, telling us in an even tone in his soft effeminate voice his ups and downs, in an interview conducted soon after he left rehab. It covers the time he amassed enormous wealth and fame as champ when he was only 20 and his down period that included his failed marriage at 21 to the 22-year-old actress Robin Givens, serving a three-year sentence in Indiana for rape in the 1990s, his conversion in prison to Islam, being cheated by his slimy reptilian new manager Don King, tattooing his face with the New Zealand Maori tribe’s symbol for a warrior, his successful comeback as champ and then his boxing license revoked for twice biting in the ring Evander Holyfield. In the end, Mike squandered some 300 million dollars by partying with leeches and led a life as a womanizer–divorced twice and the father of six children.

The world-weary boxer paints a picture of himself as a loose cannon, who has extreme mood swings, lives a violent life, has some severe psychological imbalances and yet is capable of appearing at times somewhat human. His reckless life and his stated philosophy that ‘people suck,’ take away most of the sympathy he might have generated by opening up full-blast and letting us candidly see what makes him tick.

Whether or not the troubled Mike deserves our sympathy is left up to the viewer. The film’s major fault is that it gives us only Mike’s view of himself, as it tends to whitewash his messy life. It seems to me that the self-aggrandized Mike never learned to control his brutish instincts outside of the ring and with no guardian angel like Cus to look after him anymore, his inner demons got the better of him. 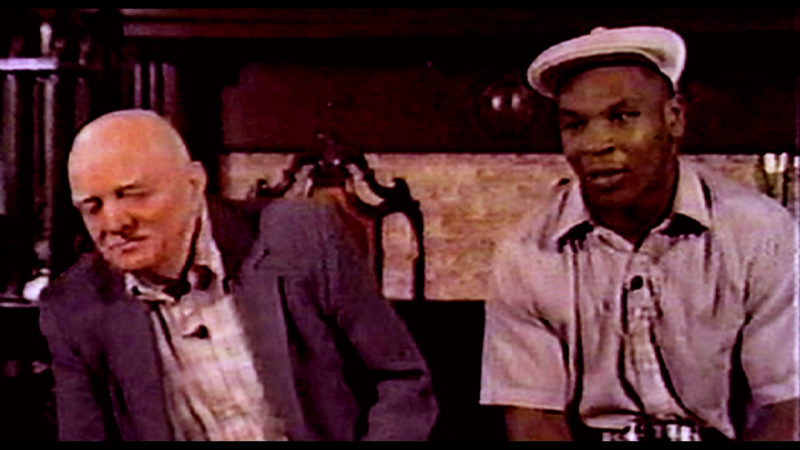