“A magical lyrical work about the improbable.”

Teorema is Pasolini’s (“Salo”) go at merging mysticism and political allegory and homosexuality. Pasolini is the eccentric filmmaker, communist, poet, and queer, whose intense work is an attempt to present the idealism of Marxism and Christ as one philosophy. Stamp plays the Christ or Devil figure who is the handsome guest in a wealthy Milanese factory owner’s home. He seduces everyone in the family gratifying their base desires, including the father, mother, daughter, son, and maid, and then abruptly leaves in the same mysterious way he arrived. This creates a new void in their lives, since he was able to subtly get them to change somewhat in their ways. But his departure has left them alone, unhappy and not fully prepared to grapple with their new found values. Only the peasant maid has the will to survive on her own. The point being that no member of the bourgeoisie can do anything right, even if they have good intentions.

The film is chock full of ideas and remains as one of Pasolini’s more interesting though controversial works, that is limited by its pretentious demands that most directors would never overcome. But with Pasolini, there’s a unique intensity in the air that provides this fable with a certain undeniable power. It proves to be a magical lyrical work about the improbable that is hard to digest but is honest, heartfelt, outlandish, deeply personal and for the most part amusing. That it fuses together so many diverse topics in the call for universality, makes it a bizarre film–even for Pasolini.

The film is not directly based on the novel Pasolini wrote, as he wrote it parallel to filming. Laura Betti as the family’s maid, won the “Best Actress Award” at the 1968 Venice Film Festival. 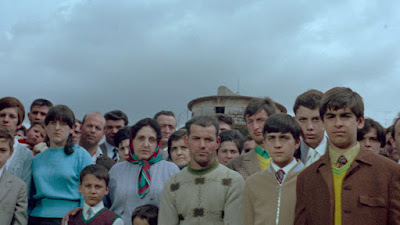