“The lightweight moderately entertaining Paramount film is set in Argentina, but it was filmed in Astoria, NY.“

Carlos Gardel is the film’s romantic middle-aged star. He was born in Toulouse, France, in 1890, more likely than in Uruguay, as he once claimed. The actor, songwriter and singer Carlos was brought up in Argentina and was known as the most prominent tango singer of all time. The 44-year-old Carlos was killed in an airplane crash on June 24, 1935, in Colombia. This was one of his last films. It came at the height of his popularity. The director is the Austrian-born John Reinhardt (“High Tide”/”For You I Die”/”Chicago Calling”). The black and white film is written by Alfredo Le Pera. The lightweight moderately entertaining Paramount film is set in Argentina, but it was filmed in Astoria, NY.

On a ship bound for Europe, the baritone-voiced singer Ricardo (Carlos Gardel) runs a tango bar and shows a romantic interest in dancer/thief Laura (Rosita Moreno). Ricardo yuks it up with stowaway loyal best friend Puccini (Tito Lusiardo), who is forced to act as a dog attendant during the voyage. When a gang of thieves is after Laura, for good reason, Ricardo comes to her aid even though it places him in great danger. The villain is a government official, Comandante Zerrillo(Enrique de Rosas), effectively played by Enrique de Rosas. 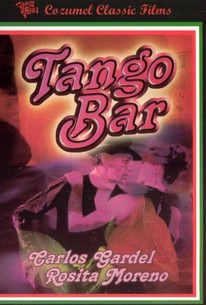