“An elegant but unexciting anti-war film, poignantly told in the form of a humanist parable.”

An elegant but unexciting anti-war film, poignantly told in the form of a humanist parable. The Georgian writer-director Zaza Urushadze(“Three Houses”/”Bolo Gaseirneba“) focuses on a 1992 regional conflict in Abkhazia to tell his deeply affecting story of hope that ethnic wars will no longer be so much a part of world history.

During the 1992 war in Georgia, between Georgians and Chechens, an elderly Estonian carpenter Ivo (Lembit Ulfsak) has stayed behind in Georgia to help harvest his Estonian neighbor Margus’s (Elmo Nuganen) crop of tangerines. In a bloody conflict at their doorstep, between the Georgian and Russia-backed North Caucasian forces, several are killed, and two wounded bedridden soldiers, Ahmed (Giorgi Nakashidze) and Nika (Mikhail Meskhi), on opposite sides, are left behind. Ivo takes them both in to the small house after burying the dead and hiding their vehicles to avoid attention. The Estonian must then deal with Ahmed, a Chechen mercenary, who is dead set on avenging his fallen comrades by killing the Georgian Nika. But because of the long time they convalesce together. the enemies form a peaceful relationship. It leads to a surprising climax when they both retrieve their guns.

There’s a fine balance maintained between the film’s wry humor and the seriousness of war, as the benign parable is optimistic that if both sides can find a way to talk to each other things can work out for the best.

For this insanity of war film, pointing out the pointlessness of shedding blood over ethnic conflicts is its aim, Urushadze won the directing prize at the 2013 Warsaw Film Festival. For me it seemed its simplistic fantasy was too simple, too contrived and predictable. But, who can argue against the filmmaker’s way of obtaining peace in that region, as no one else seems to have a better one. 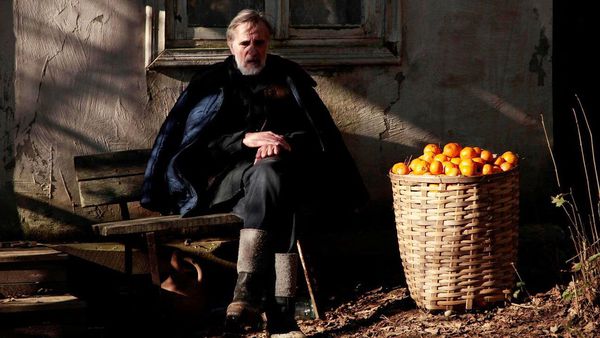 KISS THE BLOOD OFF MY HANDS