“Should adequately serve as a modestly diverting meditation on the changing scene in America.“

Ilisa Barbash and Castaing-Taylor are husband-and-wife filmmakers and visual anthropologists at Harvard. They spent three summers in rural Montana (beginning in 2001) to make this unsentimental tribute documentary to the vanishing culture of the American West. It captures the pastoral beauty of Montana’s Absaroka-Beartooth Mountains and the daily grind of the modern-day cowboy (following two hired cowhands— John Ahern and Pat Connolly) tending to a flock of sheep (some 3,000) that are taking out to pasture for the summer and go on a 150-mile-plus journey over the mountains on public lands. For city folks not familiar with the natural beauty of such wide open spaces, this film should adequately serve as a modestly diverting meditationon the changing scene in America. Though I found the DV camerawork lacking expertiseand the film too boring to fully enjoy, it had its inspirational moments and enough noise from the sheep to keep this viewer awake.

This would be the last such drive, as this was the only sheep farm in the area and after this drive it closed for business to move to a ranch closer to the Canadian border. I guess I’m supposed to be moved by that, but somehow I believe the bears could now enjoy the terrain better knowing the cowboys wouldn’t be there to shoot at it. 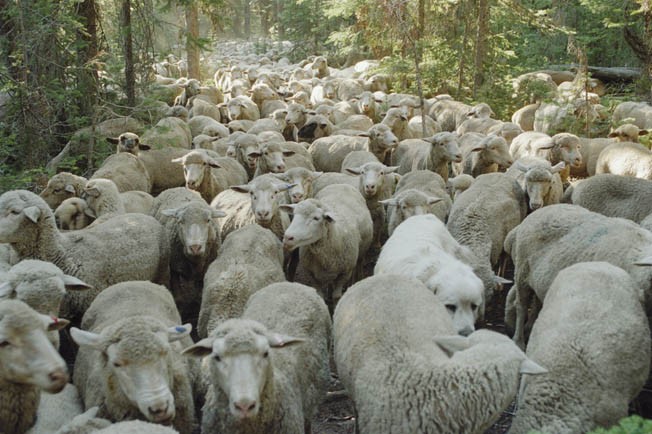