BLUES IN THE NIGHT (aka HOT NOCTURNE)

“A supposedly authentic jazz story about struggling itinerant jazz musicians that is far from authentic.”

European born director Anatole Litvak (“Anastasia”/”Sorry, Wrong Number”) crudely helms a supposedly authentic jazz story about struggling itinerant jazz musicians that is far from authentic. The director’s lack of jazz knowledge shows in the way he directs the music scenes. Writer Robert Rossen bases the black and white shot film on the play by Edwin Gilbert. It centers on career and romance problems for a troubled traveling jazz band of aspiring musicians.

Jigger Pine (Richard Whorf, future director) is the volatile hotshot jazz pianist playing with his boyish drummer partner Peppi (Billy Halop) in a St. Louis dive. Nickie (Elia Kazan, future director) is the mama’s boy law student who prefers playing the clarinet to being a lawyer and begs Jigger to let him join the band. When Jigger knocks out an obnoxious drunk customer (Matt McHugh) who challenges his musical selection, the trio is arrested. In jail they hook up with cellmate bass player Pete (Peter Whitney), and when released they hit the road as a band. In a New Orleans pool hall they recruit the sensational but untrustworthy trumpet player with swag but no money, Leo Powell (Jack Carson). His sweet singer wife, Character (Priscilla Lane), also joins the band.While riding the rails in the south, a convict on the lam from a San Francisco jail, Del Davis (Lloyd Nolan), hops into their boxcar and robs them at gunpoint. For not reporting him, he gives them the address of a New Jersey roadhouse they can get work. It turns out to be an empty place that’s run for him by his criminal crony Sam (Howard Da Silva). Del meets the band there and orders Sam to fix it up for an opening, and names it the Jungle. Also there are his bitter ex-girlfriend singer Kay Grant (Betty Field) and her hanger-on crippled gambling addict love sick piano player flunky, Brad Ames (Wallace Ford).

While the roadhouse thrives Leo chases after the femme fatale Kay, which displeases Jigger. When Character becomes pregnant, her replacement singer is Kay. Soon Jigger chases after her while prepping her to be in the band, but starts to self-destruct when Kay first says she loves him and then commands he go solo in NYC. After he quits the band, she coldly jilts him. Meanwhile the lost soul has sold out his blues principles to play bland popular white music with Guy Heiser’s big band (Will Osborne and his orchestra). To the rescue come the jazz band and find a drunken Jigger in NYC. After things are settled in a permanent way with Del and Kay, Jigger joins his band riding again as a free spirit on the boxcars.

The Harold Arlen-Johnny Mercer score includes “This Time the Dream’s on Me,” “Here We Go Again,” and the title song sung by the black singer (William Gillespie). 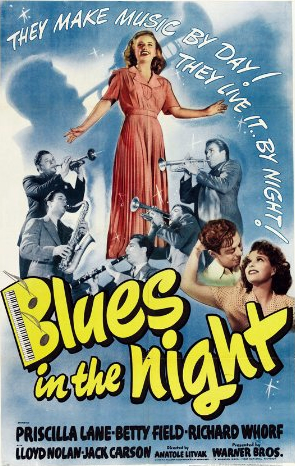