“About as much fun as being lost in a swamp.”

About as much fun as being lost in a swamp. A horror pic that’s let down by a ridiculous storyline, being short on thrills, giving us an inadequate rubber-suit lizard costume for its monster (special makeup is credited to William Munns) and poor technical production values. Wes Craven (“Scream”/”A Nightmare on Elm Street”/”The Hills Have Eyes”) writes and directs a work adapted from the D.C. Comics by Len Wein & Berni Wrightson. It can be viewed as a cult pic that parodies those 1950’s mad scientist films, but it has little appeal to adults and its main appeal is as a kiddie matinee film.

The well-built Alice Cable (Adrienne Barbeau) is a government agent sent to replace a man who has mysteriously vanished in a secret experimental lab in the middle of the Louisiana bayous. Brilliant research biochemist Dr. Alec Holland (Ray Wise) is working on an unorthodox secret government experiment to combine plant and animal cells and is being assisted by his beloved sister Dr. Linda Holland (Nannette Brown).

The evil Arcane (Louis Jourdan), a rival scientist, and his group of goons dressed in army fatigues, steal the formula that Alec has created so that the madman can control the world. During the tussle in Alec’s lab, the ruthless Arcane has his goons kill Linda and during the scuffle the green potion accidentally spills on Alec and sets him on fire. After he retreats to the swamp, he turns into a huge monster that’s a blend of human and plant. The baddies steal six of Alec’s notebooks, but Cable hides the seventh and goes running through the swamps to elude all the goons in pursuit. Every time Cable’s in danger, the Swamp Thing (played by Dick Durock) appears to rescue her. At a desolate gas station in the outskirts of the swamp Cable meets a young black boy named Jude (Reggie Batts), who helps her hide in the swamp. Jude becomes the spokesman for the young viewers (he’s a character that the youngsters should be able to identify with).

When Arcane captures both Alec and Cable, he tries the potion out on head goon Bruno (Nicholas Worth). But he turns into a rat-type creature, which prompts the egotistical Arcane to take it after Alec tells him the potion only “amplifies one’s essence to ridiculous forms.” Arcane thinks of himself as a genius, but instead turns into a werewolf. It ends on a silly note with Alec–on the outside looking monstrous and on the inside being a handsome prince with a gentle soul– fighting the werewolf in a battle to save his romantic interest Cable. It’s meant as a variation on the Beauty and the Beast tale, but is too crudely executed to register much of an impact to show the intended theme that beneath the surface there’s another side that’s worth examining. 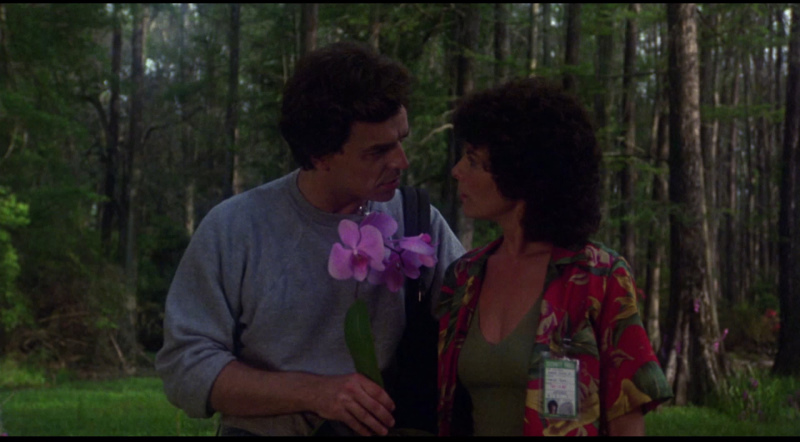