“other than being lightly entertaining, this science fiction pic is no Frankenstein.”

Boris Karloff’s first film after “Frankenstein” is as a mad scientist (his first in many such roles). This is the third and last time he teams with Bela Lugosi for Universal; they ended up co-starring in seven films. The film ran into shooting problems when original director Stuart Walker took a powder; he was replaced by Lambert Hillyer. It’s briskly paced, well-acted, features imaginative black and white camerawork from George Robinson and a wonderful nonsensical script from John Colton. It’s based on a story by Howard Higgin & Douglas Hodges.

Scientist Dr. Janos Rukh (Boris Karloff) is tormented because at an early age he blinded his mother (Violet Kemble Cooper) by accident during an experiment. Recognized by a few as an eccentric genius, though ignored as a quack by his mainstream colleagues, Janos performs an unusual experiment in his Carpathian laboratory of “capturing light rays from the past.” He performs the experiment in front of his adoring wife Diana (Frances Drake), who married him after her scientist hubby, Janos’ assistant, died; his scientist rival Dr. Felix Benet (Bela Lugosi), an expert in the use of uranium and someone curious to see if Janos’ work can be put to use for humanitarian purposes; financiers Sir Francis and Lady Arabella Stevens (Walter Kingsford & Beulah Bondi); and Lady Arabella’s adventurer nephew, the young and handsome Ronald Drake (Frank Lawton). Janos’ guests agree to finance his expedition to Africa where he searches for a downed meteor from eons ago which will provide his experimental ray with the element he calls “Radium X.” But the discovery comes with a high price, as he becomes poisoned by contact with the meteor and glows in the dark, any thing he touches dies and his brain becomes warped. This drives him to keep his wife away from him and seek a treatment from Benet, who says there’s no cure but treats him with a special blend of uranium that controls his radioactivity from spreading further. When Janos returns to Paris, he discovers that Sir Francis and Dr. Benet, though giving him credit for the discovery of Radium X, have in his eyes stolen everything from him including Ronald romancing his wife and the others his Radium X. Janos, not impressed that his Radium X cures a blind girl, seeks vengeance on the lot of them by using his new radioactive powers to kill. To avoid suspicion, he fakes his death and then carries out his plan to murder the five who hurt him the most. It was fun to see him melt down church statues and zap his vics. But, other than being lightly entertaining, this science fiction pic is no Frankenstein. 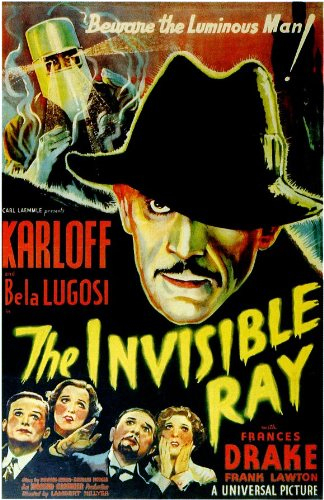